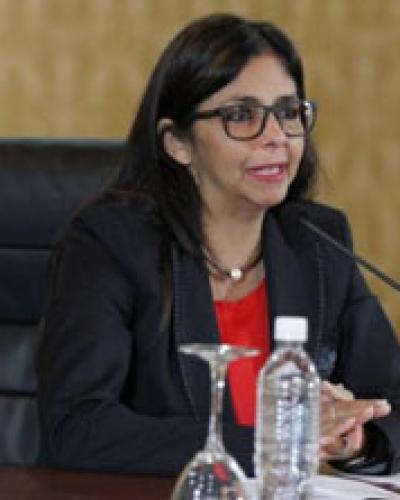 Washington, June 24 (RHC)-- The Permanent Council of the Organization of American States, the OAS, debated Thursday whether to apply the so-called Democratic Charter to Venezuela, a move pushed by Secretary-General Luis Almagro.

Venezuela called for rejection of the vote, which was supported by Bolivia, Ecuador and Nicaragua, but members have voted in favor of moving forward with the debate.

Venezuelan Foreign Minister Delcy Rodriguez said that the OAS is using the body to harass and delegitimize the government of Venezuela."  She said Almagro is directly attacking President Nicolas Maduro, clearly siding with the opposition.

The meeting could result in the formation of a "group of friends" in favor of suspending Venezuela which was proposed by Argentina earlier this week, on Tuesday.

Almagro presented a 132-page report on the state of the Venezuela economy, politics and media at a special session. He said Thursday that democracy and human rights must not be defended when convenient, but when needed.

A special session Tuesday briefed members on progress in the UNASUR-led dialogue between the Venezuelan government and opposition. Representatives overwhelmingly supported the negotiations over impinging on the country’s sovereignty.

While Venezuelan President Nicolas Maduro has promoted talks with the opposition coalition, right-wing leaders have refused to negotiate and did not show up to scheduled meetings.

Sergio Rodriguez, another Venezuelan ambassador, said that should the Democratic Charter be applied "political conditions for an intervention of any kind would be created."