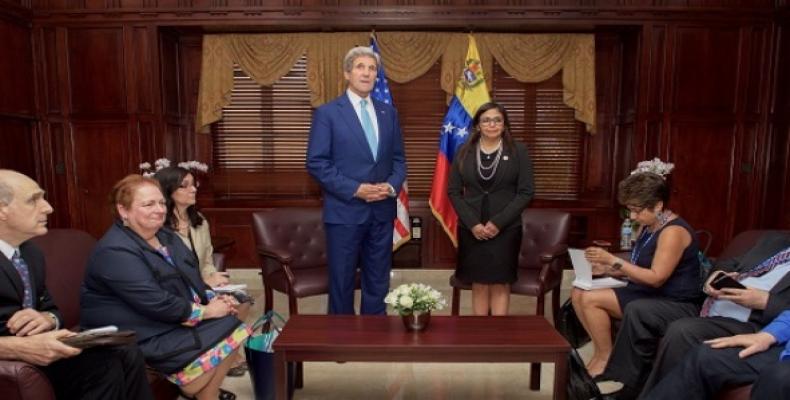 Santo Domingo, June 15 (RHC)-- Venezuelan Foreign Minister Delcy Rodriguez met with her U.S. counterpart, John Kerry, during meetings of the Organization of American States, the OAS, in Santo Domingo.  In what is being considered as a turn in U.S. policy, following his meeting with the Venezuelan foreign minister, the top U.S. diplomat announced that his country won't pressure the OAS to suspend Venezuela.

Speaking with reporters, John Kerry said he would support a dialogue to find a solution to Venezuela’s current situation, just hours after he backed calls for a recall referendum against President Nicolas Maduro.

In his unexpected announcement, Kerry also said that his government would "immediately" send one of his closest diplomats, Thomas Shannon, to Caracas to aid in the mediations being headed up by the Union of South American Nations, or UNASUR.

In Caracas, Venezuelan President Nicolas Maduro welcomed Kerry's proposal and reiterated his desire to restore ambassadors of the two countries, after eight years since diplomatic relations between both countries collapsed.

"The United States proposes that we begin a new phase of high-level dialogue.  Approved!," said President Maduro after the announcement.

In the Dominican Republic, Kerry announced that his government will not support the expulsion of Venezuela from the OAS, a move promoted by Secretary General Luis Almagro who is being accused of colluding with the right-wing opposition in Venezuela.

Kerry said: "The United States is not taking that position, we are not pushing for a suspension" -- saying that he didn't think expulsion would be "constructive."

During the OAS meeting, Foreign Minister Rodriguez said that her nation faces a strong international campaign of harassment led by Almagro, saying the OAS head aims to overthrow elected president Nicolas Maduro and “subject the nation to imperial interests.”

"Every day we have evidence of the secretary-general's bias in favor of sectors of the opposition who are seeking a coup in Venezuela."