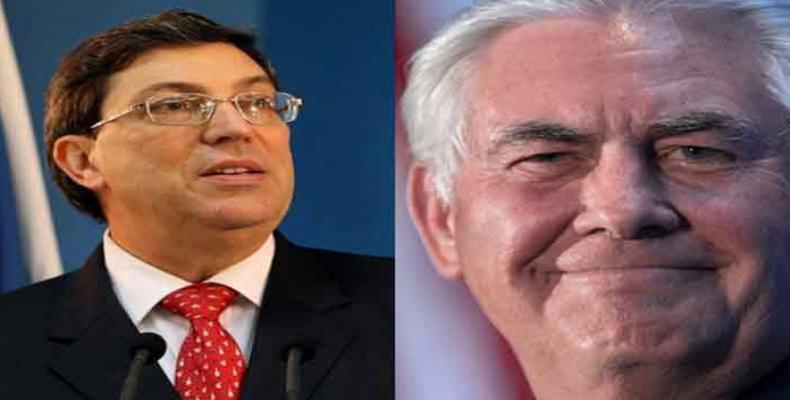 During the meeting, which was held at the U.S. State Department at the request of Cuba, Rodríguez reiterated the condolences of the Cuban people and government following the damages caused by Hurricanes Harvey and Irma in the U.S., and expressed gratitude for the condolences offered by the State Department to the island for the damages caused by Hurricane Irma.

According to reports, the main purpose of the meeting was to address the alleged incidents regarding the unexplained hearing loss of several U.S. accredited diplomats in Havana.

Cuba’s foreign minister reiterated the seriousness, speed and professionalism with which Cuban authorities have responded to these claims. A priority investigation was initiated following orders from the highest level of the Cuban government as soon as they were informed of the events, and additional measures were taken to protect U.S. diplomats and their families. This has been recognized by representatives of U.S. specialized agencies, who have traveled to Cuba since June, and whose visits have been positively assessed by their Cuban counterparts.

Rodríguez stressed to Secretary Tillerson the importance of U.S. authorities effectively cooperating with Cuban authorities in order to clarify details regarding the claims, which are unprecedented in Cuba.

He reiterated that the decision of the U.S. government to withdraw two Cuban diplomats from Washington and the argument used to do so were unjustified, and emphasized that Cuba strictly complies with its obligations under the Vienna Convention on the protection of the integrity of diplomats, in which the island has an impeccable record.

Rodríguez reiterated that the Cuban government has never, nor will it ever, perpetrate attacks of any kind against diplomats. Nor has it allowed, or will it allow, its territory to be used by third parties for this purpose.

He also informed Tillerson that according to the preliminary results of the investigation conducted by Cuban authorities, which took into account data provided by U.S. authorities, no evidence has yet been found regarding the causes and origin of the health conditions reported by the U.S. diplomats.

Cuba's foreign minister said that the investigation to clarify this matter is still ongoing, and that Cuba has great interest in its conclusion, for which the efficient cooperation of U.S. authorities is essential. He stressed that it would be unfortunate if a case of this nature were politicized, resulting in hasty decisions unsupported by conclusive evidence and investigative results.

Rodríguez also confirmed the will of Cuba to continue the bilateral dialogue with the U.S. on issues of common interest, based on respect and sovereign equality, despite the profound differences that exist between the two countries.