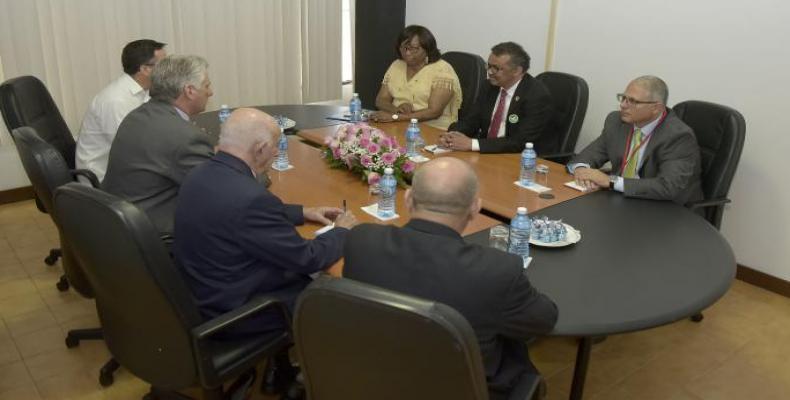 In a cordial atmosphere, they talked about the productive ties that Cuba maintains with both organizations.

In addition, they agreed to highlight, as an example of collaboration, the successful experience in the fight against Ebola in West Africa.  The Cuban president reiterated that the island will continue to develop relations with the WHO and PAHO.

Cuban President Miguel Díaz-Canel Bermúdez received Tedros Adhanom Ghebreyesus, Director-General of the World Health Organization (WHO), and Carissa Etienne, director of the Pan American Health Organization (PAHO), both of whom are participating in the “Cuba Salud 2018” International Health Convention and the “Salud para Todos 2018” (Health for All) Fair, taking place in Havana.

The meeting was also attended by Cristián R. Morales Fuhrimann, PAHO/WHO representative to Cuba.  Participating on the Cuban side were José Ramón Machado Ventura, Second Secretary of the Party Central Committee, and Minister of Public Health and Vice President of the Council of State Roberto Morales Ojeda.