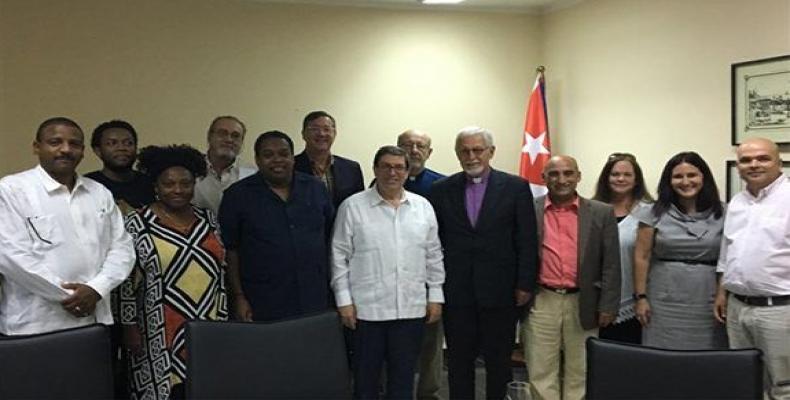 Havana, August 25 (RHC)-- Cuban Foreign Minister Bruno Rodríguez held a meeting in Havana on Friday with representatives of the National Council of Churches of Christ in the United States, the NCC.

Following the talks, which also included members of the Council of Churches of Cuba, Reverend Jim Winkler, president and secretary general of the NCC, reiterated the Council's rejection of the economic, commercial and financial blockade imposed by Washington on the Cuban people.

Reverend Winkler affirmed that 50 years ago, the NCC called for the normalization of relations between both countries -- a commitment which they have not changed and will continue to stand firm.

He said that once they return to their country, they will continue to meet with congregational representatives in Washington D.C., and call on them to continue the process of dialogue between the two countries.

For his part, Bishop Darin Moore, president of the Governing Board of the NCC, stressed that this has been a wonderful journey to demonstrate the unity of sisters and brothers of Christ among the churches of the United States and Cuba.

Bishop Moore said that the NCC represents 40 million Christians in the United States, made up of more than 100,000 congregations of 38 different denominations, "which operate in a sense of unity, for the cause of justice and peace."