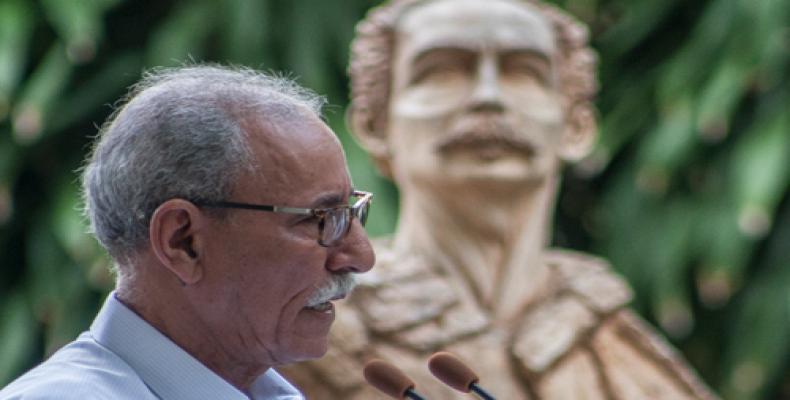 Havana, December 5 (RHC)-- Visiting president of the Sahrawi Arab Democratic Republic Brahim Ghali said that the Cuban people are a permanent source of inspiration for the Sahrawi people to follow.

In statements to the press in Havana, the Sahrawi president underscored that throughout history Cuba has fully demonstrated that it has the capacity to overcome challenges.

Brahim Ghali, who is also the Secretary General of the Polisario Front, said the Cuban people have set an example for the Sahrawi people to follow, particularly their capacity to confront and repeal all sorts of attacks from the enemies of the Cuban Revolution. He praised also Cuba's achievements in many areas despite Washington's nearly 60-year-old blockade policy.

The Sahrawi president said: “We've come here to further strengthen the historical friendship ties and the cultural links between our two Revolutions, our peoples and governments.”

“Every time we visit Cuba, we leave with renewed energy to resist challenges ahead of us.  Arab peoples are truly grateful to the Cuban people and their Revolution for their traditional solidarity and support.”

Cuba has traditionally supported the inalienable right of the Sahrawi people to their self-determination, as stipulated in the United Nations Charter and International Law.

The Caribbean country maintains strong cooperation relations with the Sahrawi Arab Democratic Republic in sectors like education and health. Up until 2017, a total of 2 876 young Saharawi nationals had graduated from Cuban universities, particularly in medicine and other related specialties.

Since 1976, Cuba has sent medical brigades to offer their services to people in refugee camps in northern Africa.

The Polisario Front is a national liberation movement in Western Sahara, which aims to end the occupation of Morocco and achieve self-determination for the Saharawi people.