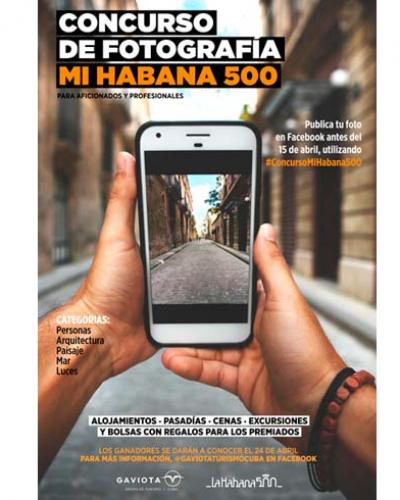 Havana, March 4 (RHC)-- On the occasion of the 500th anniversary of the Cuban capital, which will be held on November 16, the Gaviota Tourism Group has launched the My Havana Five Hundred Contest, in which professionals and amateurs of photography are invited to participate.

The call is for categories in people, architecture, landscape, sea and lights. Snapshots taken with a mobile device or professional cameras will be accepted.

Participants over 16 years of age, can upload their pertinent photographs to their Facebook accounts until April 15 next.  The photo that receives most reactions in that social media will be announced on April 24 and will receive a grand prize. The winners will  occupy first, second and third places and there will be a popularity award.

The winning photographs will become part of a collective exhibition that will later be included in several properties of the Gaviota Tourism Group.