President Miguel Diaz-Canel: U.S. wants to cut our electricity, our water and even our air 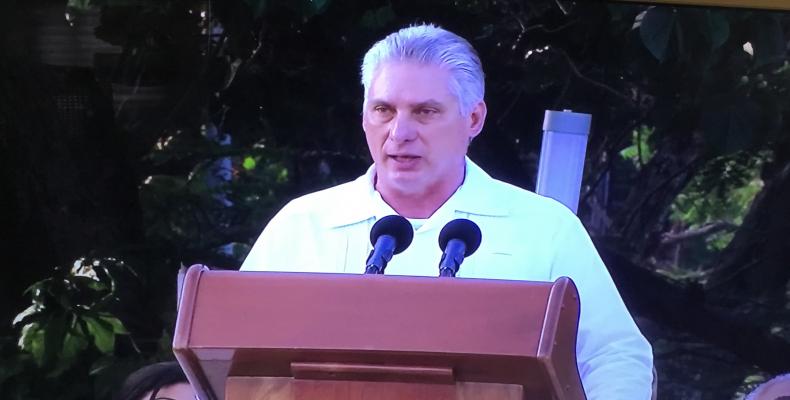 Bayamo, July 26 (RHC)-- Addressing those present at the ceremony to commemorate the 66th anniversary of the attacks on the Moncada and Carlos Manuel de Cespedes barracks, Cuban President Miguel Diaz-Canel denounced "before the people of Cuba and the world that the U.S. administration is aggressively acting to prevent the arrival of gasoline to the island.  They want to cut our electricity, our water and even our air."

The First Secretary of the Cuban Communist Party, Raul Castro, presided over today's important ceremony in Bayamo.  Also on hand were veterans of the armed struggle against Batista and survivors of the attack on the Moncada and Carlos Manuel de Cespedes garrisons -- 66 years ago.

A number of invited foreign guests are attending the commemorations this morning in Bayamo, in the eastern province of Granma.  U.S. citizens, making up the 160-member contingent of the Venceremos Brigade -- celebrating its 50th anniversary -- are among the audience.  The brigade was one of the first internationalist solidarity with Cuba organizations.  It was created in July 1969, and since then, thousands of U.S. citizens have broken the travel restrictions preventing Americans from travelling to the island.   And they have participated in volunteer work and tour many areas of Cuba -- taking back their experiences on the island to their comrades and friends.

The celebrations to commemorate another anniversary of the attacks led by Fidel Castro on July 26, 1953 point to the beginning of the armed struggle against dictator Fulgencio Batista.  While the attacks failed in their objective of obtaining weapons to begin the struggle in the nearby Sierra Maestra mountains, the action served as a spark to ignite the revolutionary movement.

The July 26th Movement would take its name from this historic date, and rebel forces under the leadership of Fidel would turn the setback into victory -- 5 years, 5 months and 5 days later... on January 1, 1959.