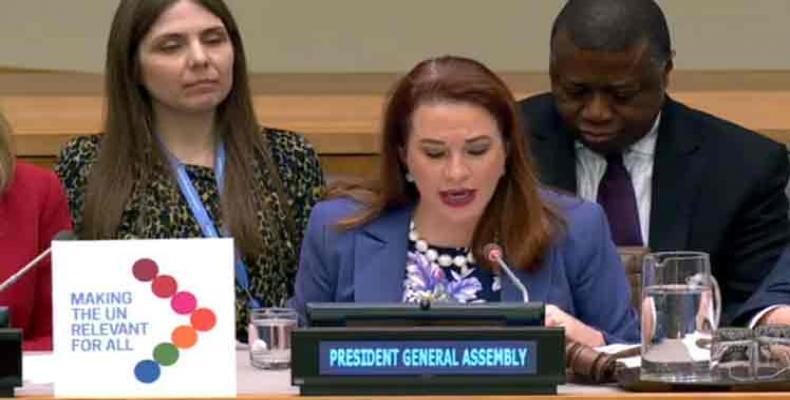 Moscow, August 1 (RHC)-- The president of the United Nations General Assembly, Maria Fernanda Espinosa, said in Moscow that the economic, commercial and financial blockade of the United States against Cuba affects the island's population.

Espinosa pointed out the negative humanitarian impact of the hostile policy towards the Caribbean island and stated that the General Assembly has condemned the blockade and for 26 years has insisted on its end, according to teleSUR.   "The negative humanitarian impact of these measures on the local population is of particular concern," said the diplomat in an interview with Sputnik Novósti.

During his visit to Cuba last June, Espinosa stressed that the votes in the UN against the blockade are overwhelming, as well as the concept that the UN Chartes  does not support unilateral measures that affect the peoples.

"In spite of this, unfortunately the blockade is still in force against that country and against the Cuban people," she said.

In 2018 alone, the blockade against Cuba caused losses amounting to more than four billion dollars, while in its almost 60 years, it is estimated that the losses have surpassed 933 billion dollars, taking into account the depreciation of the dollar against the value of gold on the world market.