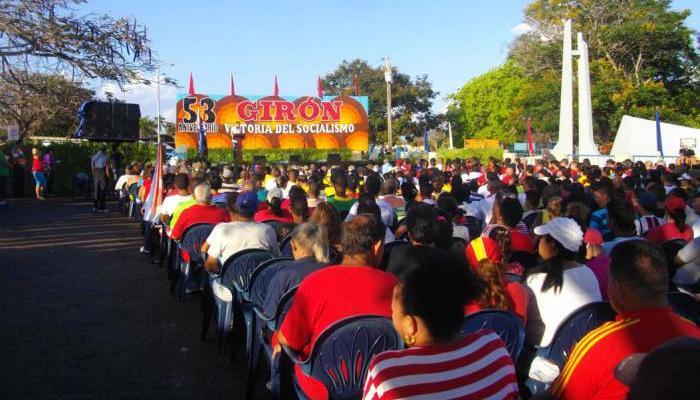 Playa Giron, April 21 (RHC)-- On Saturday, Cubans celebrated the 53rd anniversary of their victory over the US-backed mercenary invasion of 1961 in the Bay of Pigs, which is marked here as the first military defeat of the United States in Latin America.

The ceremony was held in the coastal town of Playa Giron, scene of the mercenary landing, in western Matanzas province, 220 kilometers southeast of Havana.

Inhabitants of the Zapata Swamp, where the battles took place in 1961, and the surrounding municipalities, participated in the event, also attended by Cuban Parliament President Esteban Lazo, and local government and Communist Party authorities.

Rebeca Morales, member of the Communist Party of Cuba (PCC) provincial bureau in Matanzas, stated that more than 50 years have passed since those events, that on one hand shocked the world and on the other strengthened the Cuban Revolution.

Morales also expressed Cuba´s solidarity with the Venezuelan people and government, in times when the U.S.-backed right-wing opposition has renovated its vow to topple the administration of president Nicolas Maduro and the socialist program initiated by late leader Hugo Chavez by any means necessary.