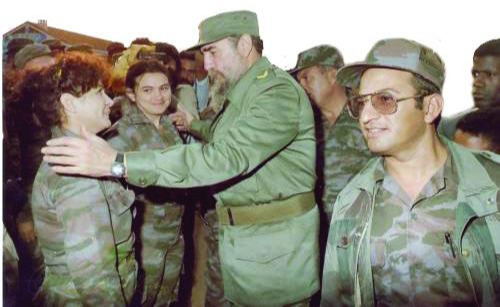 Havana, November 5 (RHC)--Cuba commemorates this Thursday the 45th anniversary of the beginning of Operation Carlota, which names the internationalist military aid provided by the island to Angola in the face of threats to its sovereignty by apartheid South Africa, the then regime of Zaire, now the Republic of Congo and the United States.

On November 5, 1975, at the request of the Popular Movement for the Liberation of Angola (MPLA), the Cuban government decided to directly support the African nation by sending an initial battalion of special troops from the Ministry of the Interior.

A year earlier, the military uprising in Portugal, known as the Carnation Revolution, made it possible for the Portuguese colonial territories to gain independence.

However, by 1975, the former colony was threatened by its former metropolis, the U.S. Central Intelligence Agency,  apartheid South Africa and Zaire (now the Democratic Republic of Congo).

To preserve the independence and territorial integrity, the leader of the MPLA, António Agostinho Neto, initially requested weapons and instructors from the largest of the Antilles, which would be complemented by Operation Carlota.

On October 23, 1975, South African forces launched an invasion of Angola and advanced rapidly towards Luanda, while Zairean troops and mercenaries arrived 25 kilometers from the Angolan capital.

The first Cuban instructors were killed on November 3 of that year, and eight days later, Neto proclaimed Angola's independence and became the first president of the new African state.

During Operation Carlota, the battle of Cuito Cuanavale (south of Luanda) took place from December 1987 to March 1988. It helped preserve the country's independence and influenced Namibia's liberation (in March 1990) and the end of apartheid.

From 1975 to 1991, some 300,000 Cubans participated in the African epic, and more than 2,000 lost their lives, whose remains were repatriated during the so-called Operation Tribute.

In the words of the Cuban Revolution leader, Fidel Castro, the conductor of that mission, it was 'an extraordinary feat by our people, especially by the youth,' and 'seldom has such a page of altruism and international solidarity been written.'

In the act of farewell to the fallen in that feat, he pointed out that they died fighting against colonialism, racism, plundering, exploitation, and in favor of independence, socialism and internationalism.

The operation took its name from the slave, Carlota, who, on November 5, 1843, revolted with a machete in her hand at the Triumvirate sugar mill in the western province of Matanzas during the time of Spanish colonialism on the island.