Cuban President praises world day of solidarity with the island 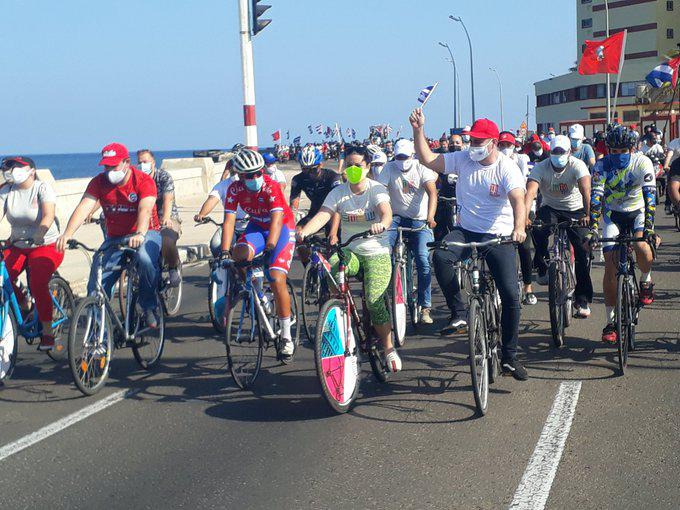 The Cuban President rode a bike alongside the Malecon together with young people.

Havana, March 28 (RHC)--Cuban President Miguel Díaz-Canel on Sunday described as exciting the day of international solidarity against the U.S. blockade and in support of our country.

On Twitter, the President sent a passionate and sincere embrace to all Cubans who are gathering to demand what is just in various cities worldwide.

The head of state added that this global movement 'is making history with Cuba at the center of all the hugs and a single demand: #DownwithteBlockae

The President rode a bike alongside the Malecon together with young people. Regarding the mobilization, he wrote: 'In front of the youth, pedaling for #UJCuba anniversary, behind cars, motorcycles, private motorcycles, and more bikes.'

Summoned by their feelings of rejection to the blockade that tries to suffocate us as a people, hundreds of people in Havana took to the Malecon Sunday morning in an enthusiastic caravan'.

The President highlighted young people's participation under the slogan "You are the present" and added, 'we see in the facts they are not waiting for the future. They are doing it'.

Díaz-Canel assured that the initiative also builds 'Bridges of Love to those who are shouting the same cry on the other side of the sea', about the Cuban-American Carlos Lazo project, which promotes the realization of these activities in the United States and Canada.

Earlier, Diosvany Acosta, secretary-general of the Union of Young Communists of Cuba (UJC), said that the massive attendance demonstrates the people's rejection of the blockade.

Some 50 cities in the United States, Canada, and other countries demanded an end to Washington's siege and joined the Bridges of Love initiative in solidarity with the Caribbean island.

Groups of emigrants and friends of Cuba in Russia, Italy, France, Germany, Namibia, Gambia, Angola, Mexico, Argentina, Colombia, among thirty other nations, carried out since yesterday mobilizations, publications on the web and actions against the northern siege.