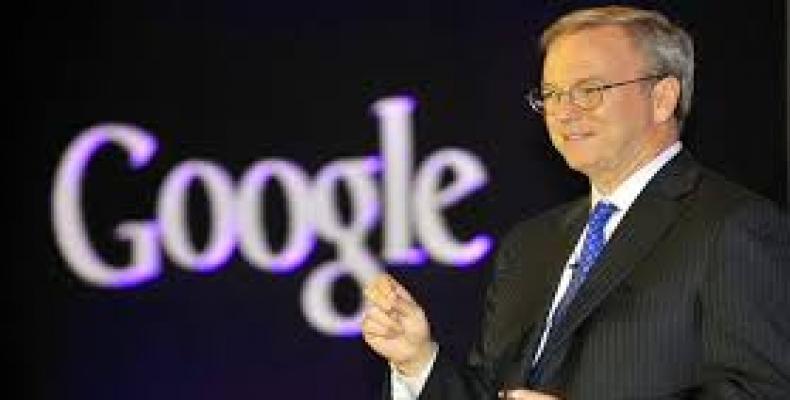 Havana, July 4 (RHC) –- Much of Google remains off limits to Internet users in Cuba, despite a recent visit to Havana by top executives from the Internet giant, according to an article published in the Wednesday edition of Granma newspaper.

Google's executive chairman Eric Schmidt paid a two-day visit to Cuba last week along with three other officials from the company, which has been accused by Havana of blocking some of its services.

Google Analytics and Google Chrome are unavailable, according to the article, adding that "Cubans cannot freely download the millions of existing apps in the Android operating system's official store."

“These policies defy reason: there are dozens of countries we call our allies and we are free to travel to that present much worse threats and concerns to the U.S. than Cuba does in this decade,” Schmidt said, adding that “Cubans believe this is largely a Florida domestic political issue, and that the Cuban-American youth all support normalization of relations along with the U.S. business community.”

He also praised Cuba's development in the areas of health care as well as women's empowerment. “The two most successful parts of the Revolution, as they call it, is the universal health care free for all citizens with very good doctors, and the clear majority of women in the executive and managerial ranks in the country,” he said.

The Google executive concluded that the blockade makes absolutely no sense to U.S. interests and called for a normalization of relations between the two neighbors. "Cuba will have to open its political and business economy, and the U.S. will have to overcome our history and open the embargo. Both countries have to do something that is hard to do politically, but it will be worth it," stated Eric Schmidt, Google's CEO.