Latin America and the Caribbean are nobody's playground, says Cuba 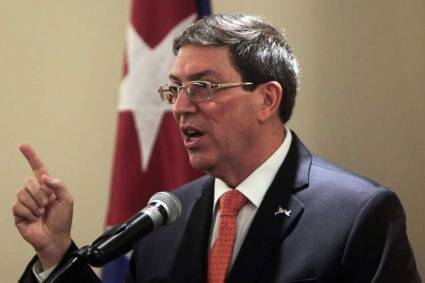 Havana, January  21 (RHC)-- Latin America and the Caribbean are not anyone's backyard or front yard, Cuba's Minister of Foreign Affairs, Bruno Rodríguez, said today, after statements on the matter by the President of the United States, Joe Biden.

On Twitter,  the foreign minister pointed out that the hegemonic Pan-American system promoted by the United States since the 19th century pursues its racist and colonialist ambition.

He added in the same way that these conceptions "fell into crisis a long time ago and are not going to recover."

Also in a tweet, the general director for Latin America and the Caribbean at the Ministry of Foreign Affairs, Eugenio Martínez, highlighted that the North American President speaks of "back yard," "front yard" looking for a better face compared to the region.

However, he remarked, Biden "ends up reflecting his true intentions with the worst of US policy, which seeks to limit sovereignties to guarantee interests of domination."

Martínez underlined the "cacophony of the president to present a better face vis-à-vis Latin America and the Caribbean."

The deputy director of Europe and Canada at the Havana Foreign Ministry, Nelson Tamayo, condemned Washington's hegemonic attempts on the same platform.