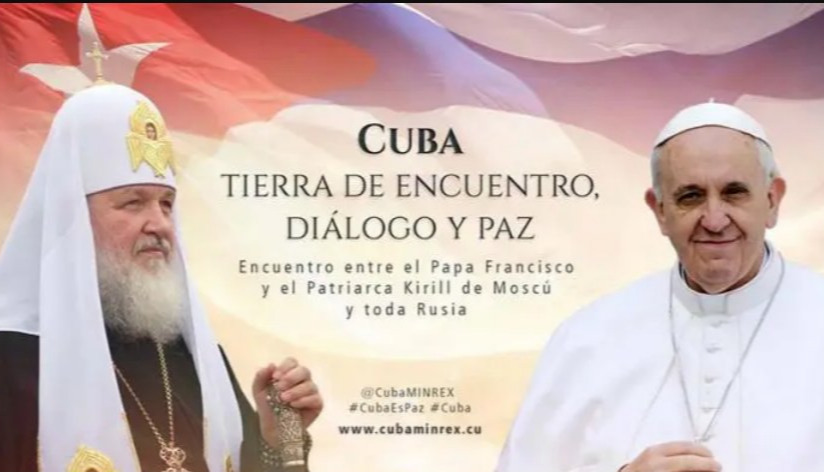 The fifth anniversary of the historic meeting in Cuba between Pope Francis and Kirill, Patriarch of Moscow and All Russia, is being remembered this Saturday by the Catholic and Orthodox faithful around the world.

Havana, February 12 (RHC)-- The fifth anniversary of the historic meeting in Cuba between Pope Francis and Kirill, Patriarch of Moscow and All Russia, is being remembered this Saturday by the Catholic and Orthodox faithful around the world.

Army General Raúl Castro, then President of the Councils of States and Ministers of Cuba, received both personalities at Havana's José Martí International Airport.

During the meeting, and for the first time in history, both religious leaders signed a Joint Declaration in which they expressed the need to strengthen fraternal ties not only among all Christians but also among people of good will around the world.

In their dialogue, which they described as a contact between "brothers of the Christian faith" to "speak out loud, heart to heart", they agreed to "discuss mutual relations between the Churches, the essential problems of our faithful and the prospects for the development of human civilization".

In this sense, the declaration refers, among others, to the most pressing world problems such as those faced by "people who find themselves in great difficulty, living in conditions of extreme need and poverty, while the material wealth of humanity continues to increase.

They also warned that it is not possible to remain indifferent "to the fate of millions of migrants and refugees who knock at the door of the rich countries".

They also pointed out that "our fraternal meeting took place in Cuba, at the crossroads between North and South, East and West. From this island, symbol of the hopes of the 'New World' and of the dramatic events of the history of the 20th century, we address our word to all the nations of Latin America and other continents".