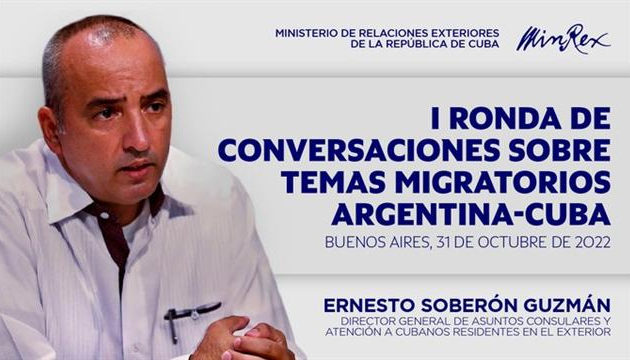 Round of Migratory Talks between Cuba and Argentina

Buenos Aires, October 31 (RHC)-- Representatives of Cuba and Argentina will hold today in Buenos Aires the First Round of Talks on Migratory Issues with the purpose of guaranteeing a regulated, orderly and safe flow of travelers.

According to the Cuban Ministry of Foreign Affairs, the purpose of the meeting is to analyze possible joint actions in order to discourage illegal acts associated with irregular migration.

During an exchange with Cubans living in this nation, held the day before, Soberón expressed the island's will to strengthen ties with its citizens in all parts of the world.   He also stated that he will explain to his Argentinean counterpart the factors that cause the irregular flow of people, among them the intensification of the economic, commercial and financial blockade imposed by the United States on the Caribbean country for more than six decades.

Washington's non-compliance with migratory agreements, the suspension of U.S. consular services in Havana, the denial of visas, the facilities granted to Cubans when they arrive illegally in U.S. territory and a strong media campaign to blame the Government of the island for everything that happens, he said.

Soberón announced that Cuba is preparing a Citizenship Law and the approval of projects on Passports and Aliens is expected.   In addition, he assured that efforts are being made to achieve a wide participation of the residents abroad in the development of the country.