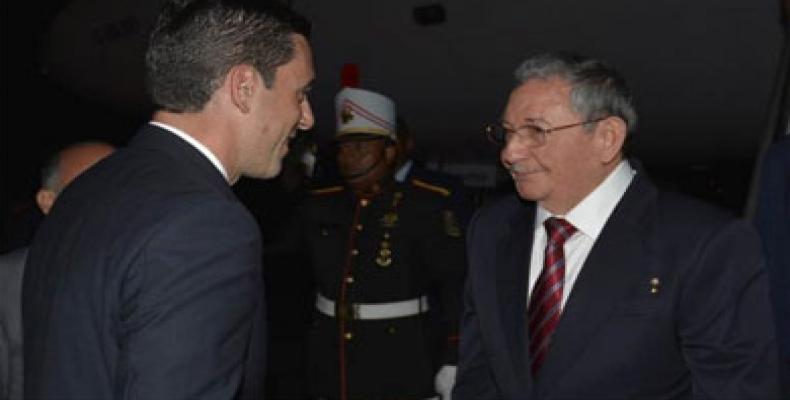 Panama City, April 10 (RHC) — “Greetings from Cuba to the Panamanian people and government” were the first words by Cuban President Raul Castro upon arriving in Panama on Thursday evening, to participate at the 7th Summit of the Americas, an event described as historic and a symbol of change in this part of the world.

The Cuban head of state was welcomed at the Panama Pacifico Airport by Deputy Foreign Minister Luis Hincapie, the director of Protocol and Ceremony of Panama, Roberto Zuñiga, and Cuban Ambassador Miguel Pardo.

As Raul Castro has reiterated in different scenarios, the Cuban delegation is attending the 7th Summit of the Americas on equal grounds and without any conditioning to present its position on issues at the center of interest for the region with full respect.

According to the Summit´s agenda, the opening session will include the statements by UN secretary general Ban Ki-moon and by the general secretary of the Organization of American States Jose Miguel Insulza. A salutation message from Pope Frances is also expected to be read at the session by Vatican State Secretary Cardinal Pietro Parolin and finally, Panama´s President Juan Carlos Varela will welcome the delegations.