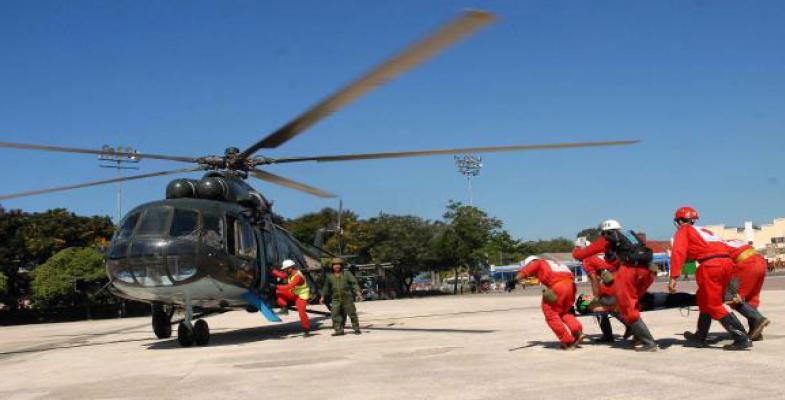 Experts predict for this year an active cyclonic season that extends from June 1 to November 30. In view of this perspective Cuba is preparing to minimize possible human losses and material damages.

Experts predict for this year an active cyclonic season that extends from June 1 to November 30. In view of this perspective Cuba is preparing to minimize possible human losses and material damages.

With this objective in mind, this weekend Meteoro 2022 will be held across the island, a popular exercise that every year allows perfecting the country's plans to face this and other natural phenomena.

It will also be an occasion to celebrate the 60th anniversary of our Civil Defense, whose rapid action over the years in the face of various events has been recognized by international organizations such as the UN and governments of other nations.

They highlight the allocation of resources to protect the lives of its citizens in the first place, despite the limitations imposed on the country by the U.S. blockade.

In fact, the United Nations suggested that given the high efficiency of the Cuban system, it could be used in other nations to reduce the effects.

This system coordinates and organizes the tasks of prevention, protection, rescue, shelter and recovery, including state support to the victims.

Its essential element is the coordinated participation of the entire population and various institutions such as the Ministry of Health and the Institute of Meteorology, which maintains constant surveillance of the trajectory and evolution of these phenomena, which are becoming more intense every day as a result of climate change.

To keep the population informed and enable the adoption of preventive actions, the Institute of Meteorology relies on an observation network that includes 68 weather stations and 8 radars covering the Cuban territory and adjacent seas.

It also has 137 risk management centers and 380 early warning points, which facilitate a rapid response.

The media also play a fundamental role in keeping the population informed and contributing to increase the perception of risk in the face of these phenomena that affect us.

In addition to this, children and young people are prepared in educational centers through talks by specialists and didactic materials.

Meteoro exercises contribute to a better preparation at all levels and especially of the population, providing them with tools to know what to do in case of any event.

Cuba has become a world reference in disaster risk reduction, however, it continues to work to protect the lives of all Cubans, while sharing its experience with the rest of the Caribbean states.