At UN, international community comes out against U.S. blockade of Cuba 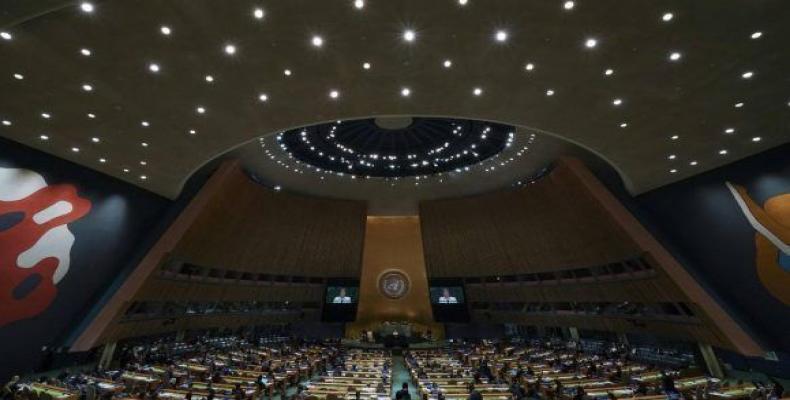 New York, October 31 (RHC)-- For the 27th consecutive year, the United Nations General Assembly is debating a Cuban-sponsored draft resolution on the “Necessity of Ending the Economic, Commercial and Financial Blockade Imposed by the United States of America against Cuba.”

The debate and vote on the resolution against Washington's nearly six-decades old blockade policy takes place as the current U.S. administration has significantly tightened the economic siege of Cuba, as well as restrictions on U.S. citizens wanting to travel to the neighboring Caribbean state.

Likewise, U.S. representatives at the UN have resorted to blackmail and pressure to try to influence the vote of sovereign nations, which for 26 years in a row have sided with Cuba against Washington's coercive measure.

As Cuban foreign minister Bruno Rodríguez charged recently, the U.S. delegation is trying to confuse UN member states, towards delaying and hampering this year's adoption of the UN resolution that urges the lifting of the U.S. blockade policy.

Bruno Rodríguez recalled that the U.S. State Department introduced eight amendments to the Cuban-sponsored draft resolution, which should be debated and voted on, prior to the vote on the draft resolution against the blockade.

Bruno told the press on Tuesday in New York that the introduction of these amendments by Washington, seek to generate confusion amongst UN member states, since if adopted, these amendments would change the whole essence of the draft resolution against Washington's blockade.

Bruno said: “Those amendments seek to change the very essence of the Cuban resolution. They want to turn it from a resolution against the U.S. blockade of Cuba, particularly its extraterritorial nature, into a resolution that condemns Cuba, using the human rights issue. It is totally unjustified and unacceptable. They pretend to ignore a very important element --that the U.S. blockade itself constitutes a gross, massive violation of the human rights of the entire Cuban people.”

The top Cuban diplomat insisted that the U.S. delegation wants to create the false illusion that Washington has some international support for its anti-Cuba policy. At the same time, they want to delay the process and boycott the adoption of the Cuban-sponsored draft resolution.

During Wednesday's General Assembly session, senior representatives of regional organizations, blocs and national governments took the floor to express their support for the Cuban-sponsored draft resolution.

The permanent representative of El Salvador said the U.S. blockade contravenes the spirit of the proclamation of Latin America and the Caribbean as a zone of peace.   Speaking on behalf of the Community of Latin American and Caribbean States (CELAC), the Salvadorian diplomat expressed the bloc's rejection of the U.S. Cuba policy, particularly its extraterritorial nature. He urged the U.S. Congress to repeal the coercive measure, specially the Helms-Burton Law.

The Salvadorean representative recalled that in 2017, a similar UN resolution against the U.S. blockade was passed with 191 votes in favor. He expressed confidence that this year's vote will be very similar, and urged the U.S. government to listen to the claim of nations in Latin America and the Caribbean who demand an end to the blockade policy against Cuba.

The representative of Egypt also spoke on behalf of the Group of 77 plus China (G77+China).   He noted that for many years Cuba has contributed its assistance to nations and peoples in need all over the world in times of natural disasters, environmental crisis, and has also collaborated with those nations in the health and other sectors.  “The assistance Cuba and its doctors offered recently in the fight against Ebola in Africa is evidence of this,” he said.   And he further pledged the support of the Group of 77 plus China for the Cuban-sponsored draft resolution urging the lifting of the U.S. blockade policy.

The permanent representative of Morocco took the floor on behalf of the African Group.  He said the U.S. blockade policy on Cuba is unjustifiable, pledging African Group's unwavering support for the UN draft resolution urging its repeal.  “We advocate instead a political solution that benefits both countries,” he concluded.

The permanent representative of Namibia also took the floor, calling the U.S. blockade policy a gross violation of the Cuban people's right to food, health, culture and development.   “It is regrettable that at the time the world is immersed in pursuing Agenda 2030 for sustainable development of the United Nations, Washington insists on boycotting Cuba's strive toward full development by maintaining the blockade policy.  “Namibia advocates the approval of the draft resolution against the U.S., without any preconditions.”

The representative of The Bahamas spoke at the General Assembly debate on the draft resolution urging the lifting of the U.S.blockade of Cuba.  Speaking on behalf the 14 members of the Caribbean Community CARICOM, he renewed the regional bloc's strong rejection of the economic, commercial and financial blockade policy imposed and maintained against Cuba for nearly sixty years now.

The CARICOM representative said: “The U.S. blockade has caused the Cuban people unbearable suffering. The UN has repeatedly expressed its rejection of it. CARICOM regards the blockade policy as a violation of international law, multilateralism and the principle of sovereignty and non-interference in the internal affairs of States.”

He recalled that Cuba maintains strong cooperation relations with all members of CARICOM, particularly in areas such as health, infrastructure and trade. “Cuba is an important economic partner of CARICOM, he said, adding Cuba is also a sister nation and in that context, the U.S. blockade hampers not just Cuba's but the development of the entire Caribbean region.”

“We express our support for the Cuban-sponsored draft resolution, as we consider that the lifting of the U.S. blockade is key toward achieving normal relations within the Caribbean region,” he concluded.

The representative of Bangladesh also took the floor and spoke on behalf of the Organization of the Islamic Conference. He underscored that the U.S. blockade affects not just Cuba, but third parties and countries alike.

“We consider that this type of unilateral actions run contrary to the principles of the UN Charter. We oppose any unilateral measure that hampers relations, whether trade, economic and/or of any other nature, amongst nations of the world.

“The U.S. embargo affects not just Cuba, but third parties and countries alike. It hampers the freedom of trade that the international community is striving for.”

“World leaders approved the Sustainable Development Goals (SDGs), and they pledged to fulfilled the aspirations of the global community under the premise of leaving no one behind. The U.S. embargo prevents Cuba from fulfilling the SDGs. In this context, we risk leaving 12 million people behind.

“The United States has the responsibility of putting an end to this embargo, he said, so that Cuba can join the rest of the international community toward fulfilling the Sustainable Development Goals.

“The Organization of the Islamic Conference calls on all the nations to vote in favor of the draft resolution urging the lifting of the U.S. embargo on Cuba.”

The representative of South Africa, for his part, expressed his country's rejection of the amendments introduced by the U.S., while renewing its support for the Cuban people.   He underscored that despite the obstacles imposed by the U.S. policy, Cuba has managed to develop a health system that is comparable to those of wealthy nations.  “South Africa rejects the amendments introduced by the United States and urges that country to reestablish normal relations with Cuba and end its economic and financial blockade.”

For his part, the representative of Jamaica expressed a profound disappointment that after 26 consecutive times urging the lifting of the blockade, the UN General Assembly has to again debate and vote on a resolution against the U.S. Cuba policy.  “The blockade is an offense to the international community. Year after year, the world backs Cuba on this, but the United States disrespects us all.”   He said Jamaica is concerned that the current U.S. administration has further tightened its blockade on Cuba and pointed to the executive order signed by President Donald Trump against Cuba.

The representative of the People's Democratic Republic of Korea said the U.S. blockade violates Cuba's sovereignty and the human rights of the Cuban people.