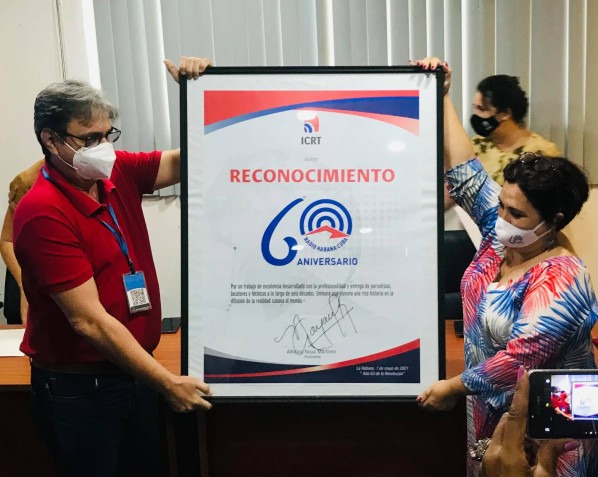 In 2021, we celebrated the year of the 60th anniversary of Radio Havana Cuba, a station that began its broadcasts as an experimental shortwave radio station on February 24, 1961, and was announced to the world by Commander Fidel Castro on April 16th of that year.

In 2021, we celebrated the year of the 60th anniversary of Radio Havana Cuba, a station that began its broadcasts as an experimental shortwave radio station on February 24, 1961, and was announced to the world by Commander Fidel Castro on April 16th of that year.  It carried out its first transmission from what is now the Plaza de la Revolución in Havana, on May 1, 1961, with its current name.

During this past year, the internationalist workers of Radio Havana Cuba received the congratulations of Miguel Díaz-Canel, President of Cuba, as well as the Seal for the 80th anniversary of the Central de Trabajadores de Cuba -- the CTC.

On Tuesday, May 4, the Round Table (Mesa Redonda) on Cuban television was dedicated to the 60th anniversary of the station.  With the host Randy Alonso, there were as panelists Tania Hernández, the director of Radio Havana Cuba, deputy directors Pedro Manuel Otero and Pedro Martínez Pírez, as well as Dr. José Altshuler.

Despite the COVID-19 pandemic and the criminal and illegal U.S. economic blockade, listeners and friends of the station were able to enjoy a beautiful pocket calendar this year with the image of the City Historian, Eusebio Leal Spengler.  This was based on the portrait made by the Ecuadorian painter Oswaldo Guayasamín at his home in Quito.

At the request of Radio Havana Cuba, the Guayasamín Foundation sent a high-resolution photograph with the portrait of Eusebio via the Internet to the station, which we were able to forward to Gabriel Navarrete Martínez, President of the Spanish Association for Culture and International Cooperation, who financed its edition of the high quality pocket calendar in Madrid.

Gabriel Navarrete, who is also an Honorary Member of the Guayasamín Foundation, sent the first batch of four thousand copies with a very supportive Cuban traveler, while the rest of the small pocket calendars were sent from Madrid by an Ecuadorian resident in Spain.

Throughout the year, we have broadcast the weekly program "RHC: YEAR 60" in which listeners and friends of the radio station have been able to hear valuable testimonies from several of its founders, led by Commander Fidel Castro.

On these programs, the voices of the engineer Enrique Oltuski and Dr. José Altshuler were heard, along with interviews with Luis Mir Mendoza, the first director of our radio station.

Likewise, listeners and friends of the station have heard the voices of Cuban personalities who spoke at events for our previous anniversaries, among them Isidoro Malmierca, Jesús Montané Oropesa, Jorge Enrique Mendoza and Roberto Fernández Retamar.

"RHC: YEAR 60" also transmitted testimonies from former presidents Hugo Chávez of Venezuela, and Evo Morales, of Bolivia, as well as personalities who had listened to the station's transmissions in prisons, including General Líber Seregni in Uruguay, the Puerto Rican patriot Rafael Cancel-Miranda, imprisoned in the United States for a quarter of a century, Communist leader Ananías Maidana in Paraguay, and Cuban Carlos Alberto Marú, held prisoner in a South African jail during the days of apartheid.

Over this past year, with the COVID-19 pandemic, the station continued to broadcast with personnel at the studios or through the internet -- by way of "tele-work."

We lament the deaths of several of our colleagues during 2021 -- Pedro Pablo Figueredo, Lorenzo Oquendo, Alberto D. Pérez and Manolo de la Rosa.

As the year came to a close, we celebrated the 60th anniversary of Radio Havana Cuba by naming one of our studios for the founder of the program "LA CULTURA EN CUBA" -- the prominent writer Alejo Carpentier.  The event was attended by writer Graziella Pogolotti, President of the Alejo Carpentier Foundation in Havana.

In this way, Carpentier's name was added to that the list of five colleagues whose names now grace our studios.  They are: Cubans Orlando Castellanos; Francisco "Pancho" García; and Miguel Angel de la Guardia.  Other studios are named after two internationalist workers: Marie-Dominique Bertuccioli from France and Roque Dalton from El Salvador.

During the coming year 2022, the workers at Radio Havana Cuba pledge to continue our mission to bring the truth about Cuba to the world.   And we wish all of our listeners a very Happy New Year and a year of peace and justice.