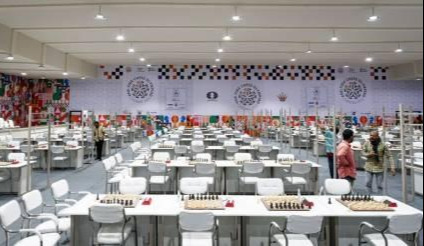 Havana, July 30 (RHC)-- The 44th Chess Olympiad being held in India will have its second round today after most of the favorites had a good start thanks to the fickle Swiss system of competition.

Former world champion and Indian chess superstar Viswanathan "Vishy" Anand opened the first round of the International Chess Federation's (FIDE) top team event, which is being played at the main hall of the Four Points by Sheraton convention center in Mahabalipuram, Tamil Nadu state.

Anand made the first move for GM Anna Muzychuk on board one of the match between Ukraine and South Africa in the women's section, while Sports Minister Anurag Thakur led the start on board one for the top Indian team.

The top three teams in the gender-neutral open section, the United States, India and Norway, scored solid victories on the first day.

Norway, which rested its star world champion Magnus Carlsen, also conceded half a unit to Lebanon.

The rest of the top teams defeated their opponents effortlessly, with India crushing Zimbabwe 4-0, the same result for Spain against Wales, Azerbaijan against Algeria and Poland with Syria. Also Ukraine, this time without Vassily Ivanchuk, whitewashed Thailand.

Saturday's second round will have the clashes of the United States against Paraguay and Moldova against India.

There is a good chance that world champion Magnus Carlsen - who was spotted playing soccer near the venue - will make his debut against the first board of Uruguay.

The two Cuban teams won all their games on the first day of the biggest FIDE tournament, which is being played for the first time in India, considered the cradle of the Science Game.

The men's quartet from the Caribbean island defeated Myanmar 4-0, as expected due to the difference in quality between the two teams, while the girls swept Uganda.