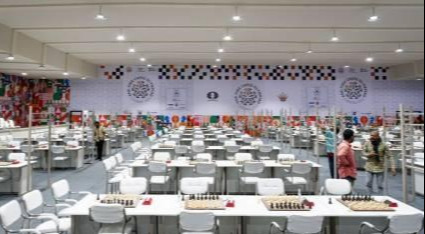 New Delhi, August 2 (PL) - The 44th Chess Olympiad being played in India will have its fifth round on Tuesday with five teams clinging to the top, among them India 2, Armenia, Israel, England and Spain, after winning all their games.

In the fourth of the 11 rounds of the tournament, which is being held in the town of Mahabalipuram, many important matches ended in 2-2 draws, such as the duels between France and India 1, USA and Uzbekistan, Poland and Romania, Canada and Iran, and Turkey against Azerbaijan.

England overcame Serbia by 3.5-1.5 and this Tuesday will fight against Armenia, who beat Austria by 3-1.

Israel, another team with a perfect score, defeated the Netherlands by 2.5-1.5 and will now face the United States.

For Latin America and the Caribbean, the Cuban teams won again with the boys defeating Hungary 3-1 in the open section, while in the girls' section the girls defeated Sweden 2.5-1.5.

Cuba is now in 15th place in the open section and in the eleventh place in the women's section of the International Chess Federation (FIDE) competition, in the best Latin American performance so far.

The island's women will face Kazakhstan in the fifth round, while the men will compete against Azerbaijan, one of the strongest teams in the tournament, which is being played at the Four Points by Sheraton Convention Center in Mahabalipuram, in the state of Tamil Nadu.

Among the other Latin American countries, the girls from Peru will face the United States, Colombia will face Spain and Argentina will play against Serbia.

Also, Brazil will play against India 3, Paraguay against Estonia, Bolivia against Egypt, Mexico against Iraq, Chile against Zambia, Venezuela against Botswana and Guatemala against Portugal.

In the open section, Argentina against Colombia, Paraguay against Georgia, Chile against India 3, Uruguay against Italy, Peru will face Andorra, Dominican Republic against Hungary, El Salvador against Brazil, Mexico against Syria, Ecuador against Algeria, Bolivia against Nepal, Jamaica against Kosovo and Venezuela against South Sudan.