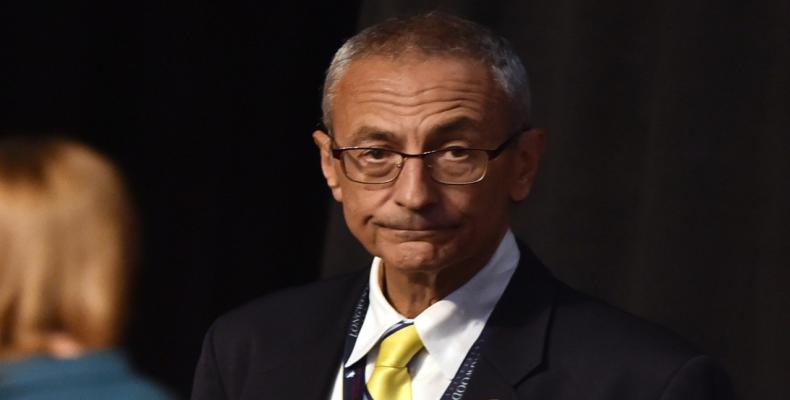 In one e-mail referring to leasing additional office space, then-COO of the Clinton Foundation, Laura Graham—who also led former president Bill Clinton’s relief efforts in Haiti—said that Goldman Sachs was doing them favors in drafting a lease “b/c of their relationship with us.”

Another friend of the Clintons, Mike Lux, had served in Bill’s administration and sent an email to Podesta announcing his move to work with Moveon.org and Daily Kos, two staple political sites of the liberal left.

“I think working with the two of them simultaneously will give me the ability to leverage a lot of exciting opportunities to help the broader progressive cause,” wrote Lux to Podesta in 2010, when he still accompanied Bill on diplomatic trips and headed the Center for American Progress. “If I can ever be helpful to you in any way, or if you have an idea related to these projects and organizations, don't hesitate to let me know.”

Podesta is also known to be close to Chicago Mayor Rahm Emanuel -- ”We talk regularly” the mayor has said -- but regular email correspondence reveals the level of their collaboration.

In February, Podesta wrote to Emanuel that he “got in and got out without questions about you or ongoing proceedings.  I think that's best for both of us.”  No other e-mail clarified what proceedings he was referring to; at the time, Emanuel was both targeted by the Chicago teachers union for his bleak austerity measures against public schools and by Black Lives Matter activists.

Last year, Podesta was forwarded an e-mail originally sent to the European Union’s head of foreign affairs Federica Mogherini from an Italian foundation, whose stated mission is to “promote a more human capitalism.” The e-mail requested that Podesta urge investment banks to help export U.S. liquefied natural gas to Europe.

“Gazprom abandoned its South Stream pipeline project, designed to deliver gas from Russia to Europe via the Black Sea and Bulgaria, last year under EU pressure. The EU has instead encouraged the development of alternative supplies from the Caspian Sea and the United States,” read the e-mail. “New liquefied natural gas (LNG) exports from the United States should also be in full swing by then and likely landing on Europe's shores in significant volumes, a development which could challenge Russia's energy dominance.”