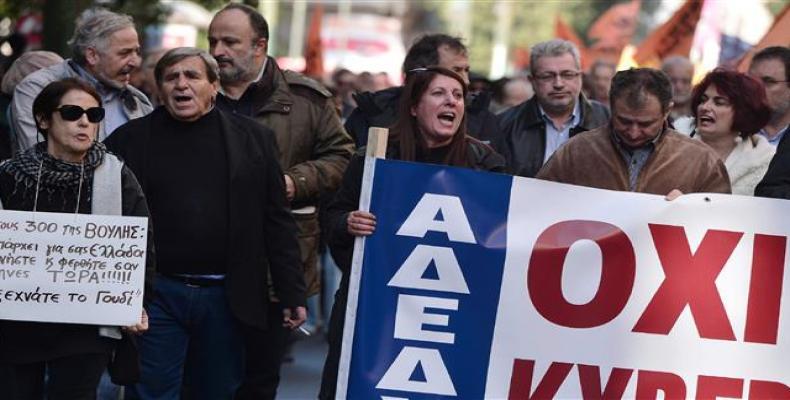 Athens, December 8 (RHC)-- Labor unions in Greece have gone on a general strike in protest at a new round of austerity measures demanded by the European Union and international lenders.  The Thursday walkout was called by the largest private and public sector unions in the southeastern European country, disrupting public transport and shutting down local administration offices.

The 24-hour nationwide protest is launched against a new set of planned budget cuts expected to be approved by the parliament early next week, and brought throngs of people from civil servants, bank staffers, merchant seamen, railway workers and state-employed doctors to the streets in major Greek cities.

"We are reacting to repressive austerity, poverty and destitution... Once again, we face absurd demands by creditors," a leading union said in a statement.  Workers and pensioners will also march in central Athens later in the day.

Protesters are angry at the extent of austerity measures Greece has been required to apply to pay off its debt to international lenders.  Athens says it has to reduce public spending, facilitate job layoffs, and introduce higher taxes to compensate for its bailout.

Last July, Greece signed a deal with its creditors -- the European Commission, the European Central Bank (ECB), and the International Monetary Fund (IMF) -- to receive a EUR 86-billion bailout in exchange for fresh austerity reforms.

The agreement triggered outrage from Greeks, who remind the fact that Greek Prime Minister Alexis Tsipras came to power on an anti-austerity platform.  Greece has already received three bailouts -- in 2010, 2012 and this year -- worth a total of EUR 315 billion from its creditors following the economic crisis in the country back in 2009.