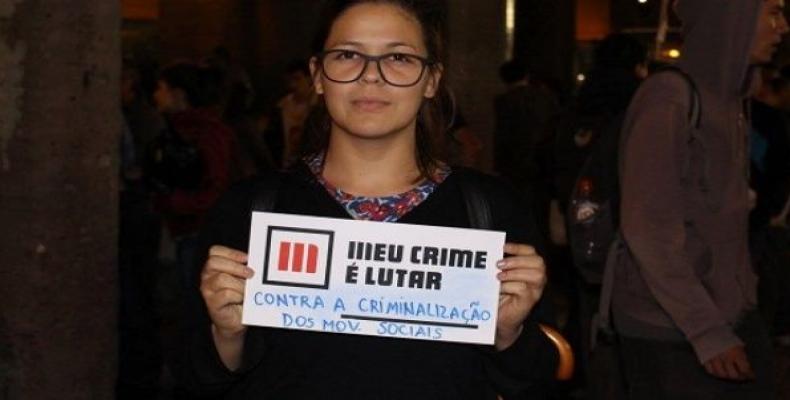 The campaign, "My Crime is to Struggle," was launched by the MST and the Brazilian Committee of Human Rights Defenders and aims to "denounce the process of criminalization that human rights defenders have been suffering in the country."

Police in the state of Paraná launched "Operation Castrate" in the wake of last year's coup to target the massive social movement.  Since November 4th, police have held four MST activists in "preventive detention."

"The members of the MST that have been criminalized through Operation Castrate are in prison because they are landless and struggle for land access," according to a statement on the campaign's website. "If defending your human rights is a crime then all of us, feminists, black populations, homeless, maroon communities, LGBT, and others grassroots activists, are criminals."

The activists -- Fabiana Braga, Claudelei Torrente Lima, Antonio Cloves Ferreira and Claudir Braga -- have been detained longer than legally permitted for so-called pre-trial detention and without full access to their lawyers.

The conflict in Parana goes back decades, where thousands of landless peasants are fighting both the state and the Araupel lumber company which, along with other multinationals, has illegally occupied land claimed by the campesinos.  The campaign argues that the detentions are a "retaliation against the MST's political actions in the region, actions that denounce Araupel's crimes and demand that the state implement agrarian reform."

Since the 1980s, the MST have created self-governing communities throughout the region, encampments which the state have declared illegal over concerns of supposed "lawlessness".

According to the MST, however, "the only justice the police have brought is the criminalization of landless families, while justice concerning the distribution of land through agrarian reform is still yet to arrive."

Under the hashtag #MeuCrimeÉLutar (my crime is to struggle), the campaign calls on allies to sign a petition demanding that the judge in the case revoke the pretrial detention order, send messages of support to the prisoners, and publicize their struggle.

"Dear comrades, as you know Brazil lives under an extreme right coup," the MST wrote in a statement promoting the campaign. "The illegitimate government has increased the criminalization and repression of popular movements while increasing neo-liberal reforms in the country. In the past few months, they have detained and politically persecuted social movement leaders and activists in an attempt to demobilize us."