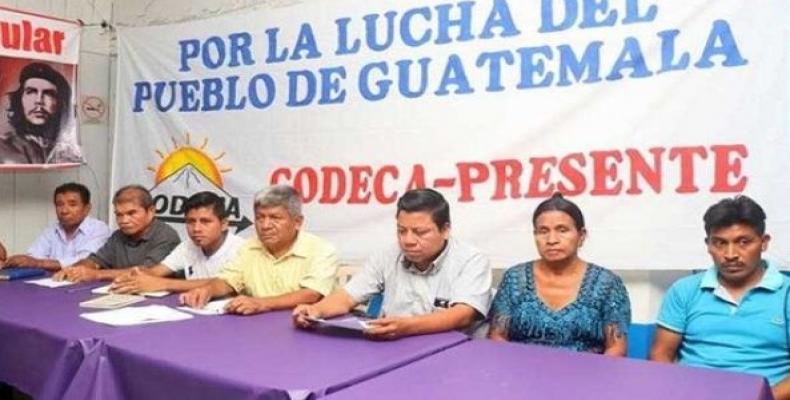 Guatemala City, May 26 (RHC)-- A new wave of protests has shaken Guatemala, similar to the 2015 "Renuncia Ya" marches which helped oust former President Otto Perez Molina.  Campesinos coming from all across the country started a national strike this week to demand the resignation of President Jimmy Morales, whose popularity has plummeted since his brother and son were caught up in a corruption scandal.

The protests, organized by the Committee for Rural Development and the National Coordination of Campesinas Organizations, CODECA, denounced the corruption of political elites, including the president and the representatives who have allegedly received bribes from the Brazilian construction company Odebrecht.

Gathering at Constitution Square like on March 7, they demanded justice, as well as general elections, the nationalizations of basic goods and services, and the convocation of a constituent assembly in order to renew democratic institutions.

Since they staged several massive marches against the current government, various CODECA leaders have been criminalized by the Public Ministry and the business sector, with some of them persecuted or arrested.

A former comedian, Morales was elected president in 2015 on pledges to clean up Guatemalan politics. He came to power after protests over a widespread corruption scandal that toppled his predecessor retired General Otto Perez, who remains in jail.  The predominantly rural protesters, who headed to the main square, said they had been tricked by Morales.

In September, a judge barred Morales' son, Jose Manuel Morales and his older brother and adviser, Samuel Morales from leaving the country, pending an investigation into suspicious payments linked to the mother of Jose Manuel's girlfriend in 2013.

In January, both were arrested, claiming their innocence.  At the time, Morales said he would support his family, but also respect the law.