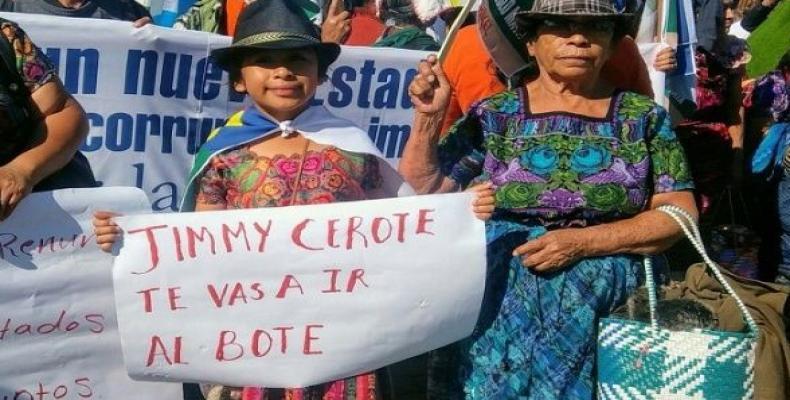 Indigenous and religious organizations are demonstrating along three stretches of highway northwest of the capital of Guatemala City in support of CICIG which, until President Morales blocked it members from re-entering the country, was part of a national investigation into the president and his National Convergence Front Party (FCN) for allegedly taking about $800,000 in unrevealed funds that were funneled to Morales’ 2015 election campaign.

Last week, Morales reasserted his pledge to let the U.N.-affiliated organization’s mandate expire in September 2019 because it allegedly posed a threat to peace and security in the country.  He told secretary-general of the UN, Antonio Guterres: "You are at the service of the member states.  It is unacceptable and contrary to the purposes of the United Nations that it attempts to become a supranational body, dictating to governments how to exercise their powers that have been delegated by their citizens electorally.  Doing so violates the sovereignty of States."

On Monday, the Conference of Religion in Guatemala (Confregua) began its ‘pilgrimage of indignation’ on Monday, a march beginning near Quetzaltenango east of the capital to the Constitutional Court (CC) in Guatemala City.  They are being joined there on Tuesday by the National Coordinator of Campesino Organizations (CNOC) and other human rights organizations for a larger demonstration in support of the permanent anti-corruption commission.   Dozens of towns in the Totonicapan department, including Solola, are also planning their own marches on Tuesday to advocate for CICIG’s return.

Morales announced his decision to revoke CICIG on August 31t just two days after a five-member congressional committee was formed to investigate the president’s potential illicit campaign financing.  The move incited peaceful protests from a broad cross-section of the country's social and political movements along with regular citizens in Guatemala City against the president’s far-reaching move.  They are banding together under the hashtag, #fuerajimmy (get out Jimmy).

In September 2017 Congress voted to grant the president prosecutorial immunity, but the measure was revoked just days prior to the congressional committee’s formation.

The CICIG was created in 2006 by a United Nations decree to investigate widespread high-level corruption within Guatemala.  Morales has been trying hard for the past year to eliminate the permanent mission from his country.