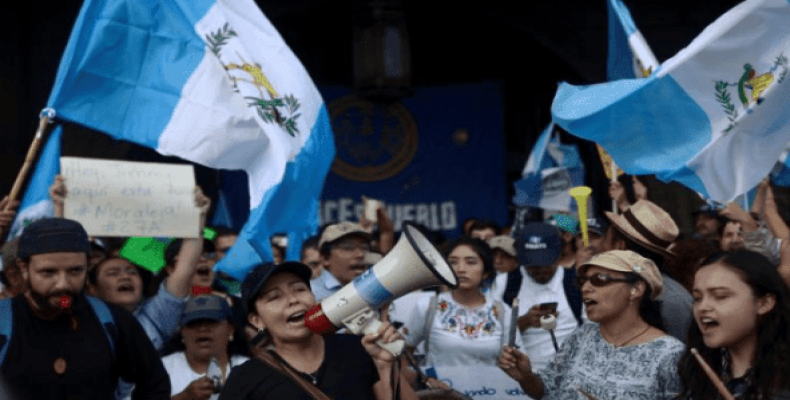 Guatemala City, April 30 (RHC)-- Several Guatemalan social groups have called for protests  to demand the resignation of the country's president, Jimmy Morales, amid a second round of illicit electoral financing investigations.  “Guatemalans demand, in all (public) squares, the cancellation of the National Convergence Front (FCN-Nation) and the resignation of Jimmy Morales for corruption, for thievery, for believing that he is above the Constitution," read a statement released by the groups on multiple social media platforms.

The call comes after the Office of the Prosecutor, and the International Commission Against Impunity in Guatemala (CICIG) pointed out for the second time that the FCN-Nation party, which is led by Morales, received illicit electoral funding during the campaign.  According to the series of reports, the FCN-Nation did not report funds it had received from prominent members of the business community in the country to the Supreme Electoral Tribunal.

Electoral crimes prosecutor Oscar Schaad said business groups funneled more than $1 million to Morales' party during the 2015 election campaign.  According to Schaad, evidence shows the campaign donations were never reported to electoral authorities.  The illegal contributions were also allegedly made in the form of food, cement, financial services and other business sectors.  "We have detected that there was financing that simply was not reported to the (electoral) court and that for various reasons the court did not detect it," Schaad said.

Heinz Heimann, a spokesperson for President, has called the investigation inconclusive and branded calls for Morales to resign premature.  "We cannot allow there to be distractions that turn us off the path toward a greater Guatemala," Heimann said.  Javier Hernandez, the leader of Morales' party in Congress, dismissed the accusations as being "more a political than legal attack."

Several month ago, Guatemala's chief prosecutor asked a court to strip Morales of his immunity so suspected campaign finance violations could be investigated.  Guatemala's Supreme Court sent a request to the Congress in September asking it to lift Morales' immunity, but lawmakers voted down the measure.

The CICIG was created in 2006 by a United Nations decree to investigate widespread high-level corruption within Guatemala.  CICIG's investigation into President Morales was hampered by legislation passed in 2017 that granted the president impunity from corruption or embezzlement inquiries. Since then, CICIG has been trying to maneuver around such questionably constitutional laws that protect him and other high-ranking elected officials.

The Jimmy Morales administration has made a number of attempts to weaken the power vested in the commission, as well as its director, Ivan Velasquez.  Last October, the government renewed his Visa with a written warning that read the CICIG director should, "abstain from interfering in internal affairs while in Guatemalan territory."