Dominican Women Take to the Streets to Demand Abortion Rights 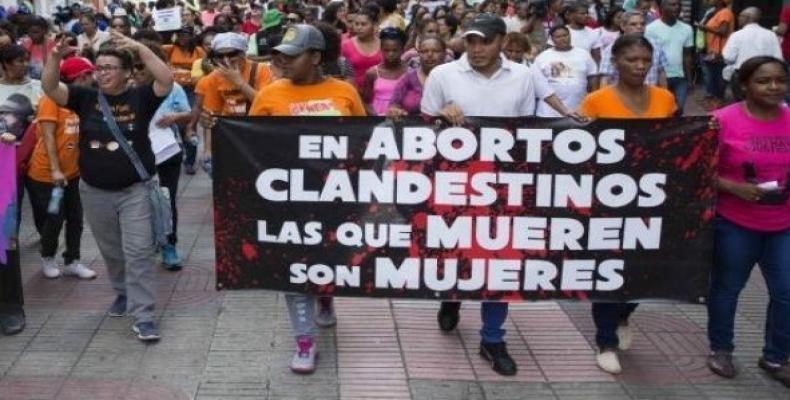 Santo Domingo, June 26 (RHC-teleSUR)-- Hundreds of women took to the streets of the capital of the Dominican Republic Sunday, demanding the country's lawmakers approve a bill that would decriminalize abortion when the pregnancy is threatening the mother's life, when it's the result of a rape, or when the fetus won't be able to survive outside the uterus.

The demonstrators walked through the historical center and gathered at Independence Park, where they read a communique demanding the right to abortion. The criminalization of abortion, said the document, would be a violation of the constitution, as well as many international agreements signed by the country in order to protect women's reproductive and sexual rights.

About 13 percent of maternal deaths during birth occur during an illegal abortion, according to the movement's spokesperson Arelis Ferrer, while there are an estimated 35,000 abortions per year across the country.

The protest comes one month after the senate, where the opposition Dominican Liberation Party holds the majority, refused to reform the criminal code on the recommendation of the administration of Dominican President Danilo Medina.

In December 2015, the Dominican Republic's constitutional court decided to reinstate a total ban on abortion, meaning that any woman or doctor found responsible for carrying out an abortion can be sentenced to 2 to 10 years in prison.

The bill is now being debated in the legislative commission of justice in the lower chamber.  Lawmaker Faride Raful, from the opposition Modern Revolutionary Party, revealed that 11 out of 15 members of the commission rejected Medina's recommendation to decriminalize abortion in the three cases mentioned above.