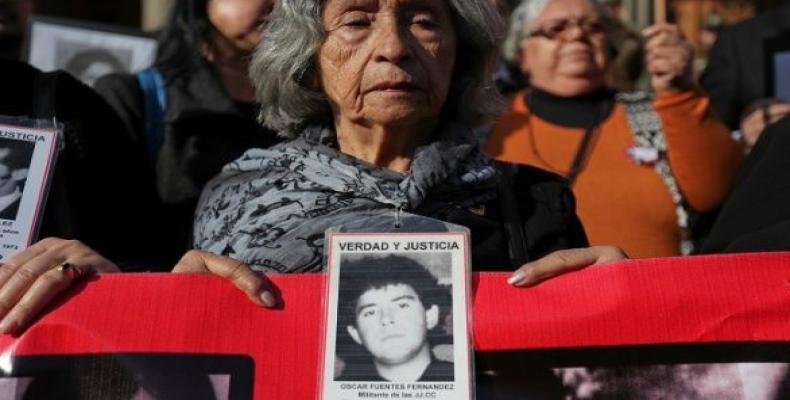 Santiago de Chile, August 21 (RHC)-- Members of Chile’s congress are formally inditing three Supreme Court judges for abandoning their “constitutional obligations” based on their ruling to release several members of the Augusto Pinochet dictatorship imprisoned for crimes against humanity.

Lower house elected officials from the New Majority, Wide Front coalition and the Party For Democracy (PPD) parties will present their constitutional indictment against three ministers of the Supreme Court on Wednesday.

The indictment accuses three judges from the Second Criminal Chamber of the Supreme Court -- President Hugo Dolmestch, Carlos Kümsemüller, and Manuel Valderrama -- for "evident abandonment of constitutional obligations." The three magistrates voted to conditionally release five former members of the Augusto Pinochet military dictatorship -- 1973 to 1990 -- from prison in late July based on good behavior.

Former judge Gamaliel Soto, and former soldiers Jose Quintanilla Fernandez, Hernan Portillo Aranda and Felipe Gonzalez Astorga, along with police officer Manuel Perez Santillan, had been carrying out sentences for kidnapping, torture, homicide, and crimes against humanity that they committed at the Punta Peuco prison during the Pinochet regime.

Human rights lawyer Nelson Caucoto decried the court's decision to release the men, stating there was no justification to grant parole: "It does not make sense to grant people freedom to live alongside others if they have not recognized the gravity of their crimes, nor have shown repentance beyond the fulfillment of certain formalities."

All five were involved in the disappearance and torture of 31-year-old Dr. Eduardo Alberto Gonzalez Galeno in 1973, and the imprisonment of his wife three months pregnant at the time, Natacha Maria Carrion Osorio.

Communist party member and president of the chamber’s Commission For Human Rights, Carmen Hertz, said she was confident that the Senate will approve the indictment.  Over the past two weeks, groups of relatives of disappeared detainees and the Inter-American Commission on Human Rights (IACHR) have come out strongly against the court’s decision.

Meanwhile, the IACHR released a statement saying it was "concerned over the decision of the Criminal Chamber of the Supreme Court of Chile to grant conditional release to those convicted of serious human rights violations."

Earlier this month, members of Chile’s Democratic Revolution party said they would push to indict the magistrates on the grounds that they were violating the Rome Statute which protects victims of crimes against humanity.  The Group of Relatives of Executed Politicians (AFEP) already requested that justice Hugo Dolmestch is removed from the court.

Lower house representative, Gabriel Silber said his party will wait to release a decision on the indictment. Silber, a Christian Democrat, said he’s “worried" that the accusation could mark a precedent of interference between state powers.

In June, President Sebastian Piñera, also of the Christian Democrat party, issued a pardon for former colonel Rene Cardemil who had been sentenced to 10 years in prison for executing six people in October 1973.  Those released were slated to serve until 2020 or 2023.