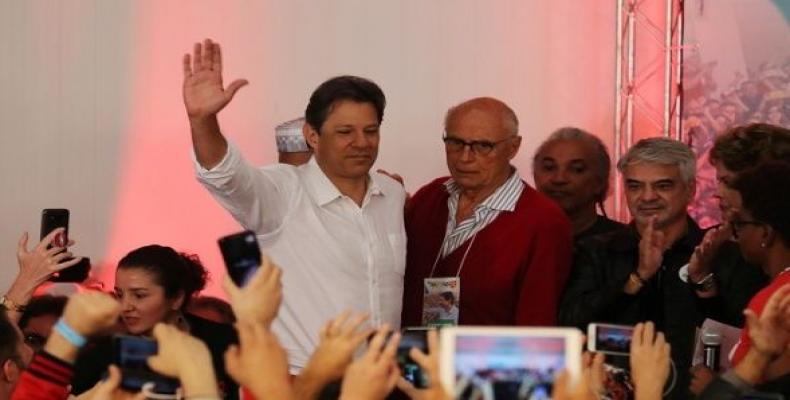 Brasilia, October 29 (RHC)-- With the victory of far-right Jair Bolsonaro in the second round of Brazil's presidential elections, the former candidate of the Workers Party said that Brazilians must aspire for a great social movement to defend their freedoms and rights.

"We, who helped build one of the largest democracies in the world, are committed to maintaining it, and not accepting provocations, not accepting threats," Haddad told his supporters Sunday night.

The former candidate of the PT said that Brazilians must aspire for a great social movement to defend the freedoms and rights of Brazilians.
The leader of the Movement of Rural Landless Workers (MST), Joao Pedro Stedile, argues that the PT and the other leftist organizations must build up strength and organize the people to face the future government of Jair Bolsonaro.

According to Stedile, if the neo-liberal agenda of the new government is materialized, it will generate a social chaos that will allow the popular movements to resume the offensive and mass mobilizations.

The social leader warned that the political left and social organizations have the challenge of organizing popular committees throughout Brazil in order to move towards a new debate in the country, on a new sovereign project for an egalitarian and just society.

Both Haddad and Stedile acknowledge that after losing the second round of elections, the social movements should be reunited in order to create a great national movement that will allow them to face Bolsonaro's policies and return to power in Brazil.

Bolsonaro won the Brazilian presidential elections with over 55 percent of the vote, beating Haddad who scored 44.3 percent in the country's most polarized elections in decades.