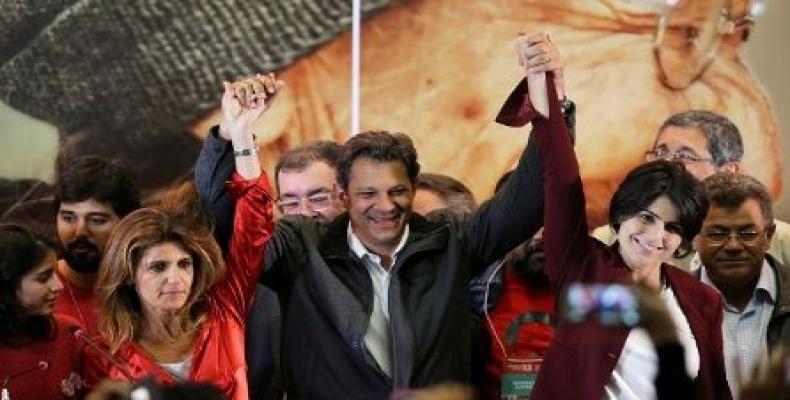 Haddad spoke a day after Bolsonaro renewed his vow to wipe Haddad's Workers Party (PT) from the country's political map, and after a video surfaced of Bolsonaro's son, Eduardo, saying the Supreme Court could be forcibly disbanded if it stripped his father of an electoral victory.

"If (Bolsonaro) has the courage to threaten democracy before the election, what do you think he will do if he wins?" Haddad said at a press conference in Sao Paulo. "Either we toss aside this authoritarian tradition that Brazil has always had ... or we are in danger, including physical, if we do not alert the country that the political opposition, judges and journalists are being threatened before the election has been decided."

Until his presidential run, Bolsonaro was best known for his pro-military junta, homophobic and misogynist rants over the years.  His son is also a member of Congress who was re-elected in the October 7th first-round ballot with more votes than any other lawmaker in the country.

In a video taken in July of him speaking in a classroom, Eduardo Bolsonaro said the Supreme Court could be shut down if it countered his father.  "One wouldn't even need a Jeep, sending a soldier and corporal would be enough to close the STF," he said, using the acronym for the court.

The younger Bolsonaro posted another video Monday on his Twitter account criticizing the top court and backing his father's proposal to increase its size from 11 to 21 members — something Haddad said was a clear attempt to neutralize the court's current justices.

Brazil is living in "dark times," fellow justice Marco Aurélio Mello told the Folha de S.Paulo newspaper for an article posted on its website on Monday.  Polls are showing that Bolsonaro is headed for victory in Brazil's second round on October 28th but experts say that Haddad would have a chance in winning if fewer people abstain from voting compared to the first round, a likely scenario as Bolsonaro is the most rejected candidate by Brazil's voters.

As Brazil's most polarized presidential campaign in decades entered its last week, thousands of Bolsonaro's backers have gathered in several cities across Brazil.  Meanwhile, anti-Bolsonaro protesters have come together for events that were mostly organized by a Facebook group of women voters who oppose him.