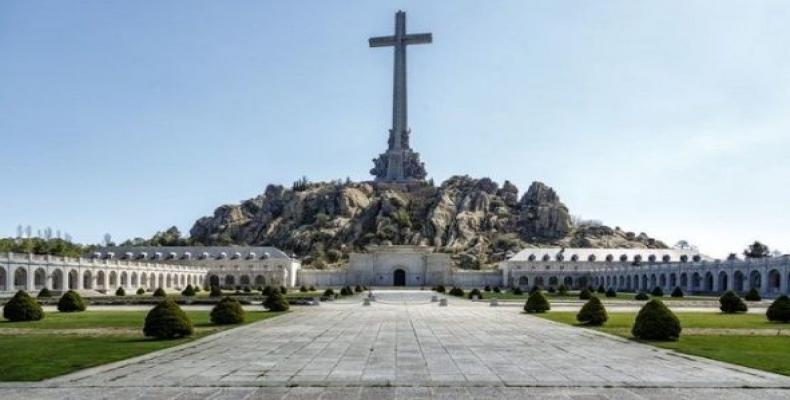 Madrid, October 22 (RHC)-- The exhumation of Francisco Franco from the Valley of the Fallen and his later burial in the cemetery of El Pardo-Mingorrubio, scheduled for Thursday, will cost the public coffers a maximum of 63,061.40 Euros.

EFE Agency informed that twenty-two relatives of the dictator will attend the act and they will carry the coffin on their shoulders.  The plan prepared by the Government foresees that Franco's remains will be transferred in an Armed Forces helicopter and that there are no images of either the exhumation or its inhumation in the pantheon where his wife, Carmen Polo, already rests.

Some funeral home officials and employees are receiving threats from far-right groups, according to La Moncloa sources.  The Government has invested 39,800 Euros in conditioning the new grave, of which it is the owner.

The Spanish newspaper El Pais reports that only 2 out of the 22 relatives will witness the exhumation.  The procedure will be protected by a tent with a roof.  Within the tent will be only the Minister of Justice, Dolores Delgado, the notary major of the Kingdom; between four and six operators of the contracted funeral home; Bolaños, the vice secretary of vice presidency, Antonio Hidalgo; and a forensic specialist whose name the Government did not want to confirm because some of the people and companies involved in the operation have already received serious threats from ultra-right groups.

The family will be picked up at three different points in Madrid for security reasons and before entering the basilica, like the rest of the authorities and operators, they will have to pass a scanner and a metal detector to verify that they do not carry any device that allows them to take pictures or record audio.

The Government has invested tens of thousands of Euros in the new grave because it was in very bad condition.  Sources from La Moncloa say they offered Franco's grandchildren to acquire it for the appraised price of a square meter, but they rejected it.  Therefore, the maintenance and the National Police device that will monitor the pantheon will be the responsibility of the State.  The Government trusts, in any case, to eliminate this security device over time.