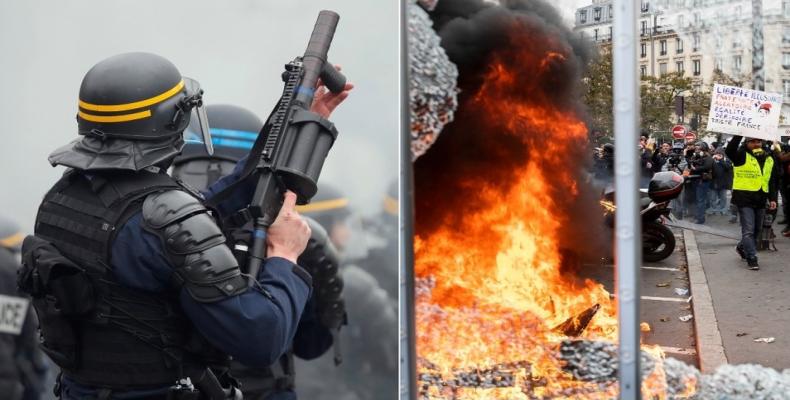 Paris, November 17 (RHC)-- French riot police have fired tear gas to disperse protesters in the country’s capital Paris on the first anniversary of anti-government "Yellow Vests" demonstrations.   Violence broke out on Saturday when police intervened to prevent hundreds of protesters from preparing to march in northwestern Paris and block the city’s ring road.  Paris police said at least 100 people were arrested during the clashes.

The Yellow Vest protests erupted across France on November 17th last year in response to President Emmanuel Macron’s economic plans.  Ever since, the country has been the scene of street rallies, which on many occasions prompted security forces’ violent repression and mass arrests.

The protests forced the government to put its reform program on pause and refocus on cutting taxes for lower-income households, after he eased the tax burden on businesses and investors in Macron’s first two years in office.

French President Emmanuel Macron has vowed to press ahead with his planned pension reforms despite plans by unions to call strikes against such a measure.  Two-thirds of the French, according to a recent survey, believe that the president has been doing little to improve their quality of life in his first two years in office.

The poll, conducted by the French news channel BFMTV, shows 55 percent of respondents said they were “disappointed” by his actions as president.  Some 71 percent of those polled said that Macron’s tough social and economic policies had not helped “transform” France as promised.  Some 62 percent also see Macron’s election in May 2017 as a “negative” event.