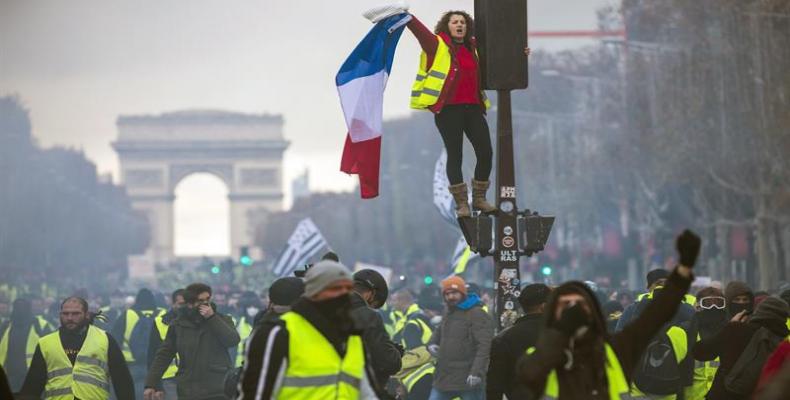 Paris, December 28 (RHC)-- Despite the calls of President Emmanuel Macron for a truce, thousands of French Saturday took to the streets of Paris where workers, students, retirees, and Yellow vests came together in common action against the pension reform, which citizens have been rejecting during 24 days on a row.

"If the government expected a truce for Christmas, it must be very disappointed because the mobilization is still here," the General Confederation of Labor (CGT) Secretary Philippe Martinez said.

Incapable of disappearing the root causes of citizen discontent, the Macron administration is trying to divide French workers through "calls for conciliation," which target the most reformist unions asking them to be more understanding and side with the authorities.

"The CGT practices a form of unionism that rejects any reform," Transport Minister Jean-Baptiste Djebbari said and added that the French Democratic Confederation of Labor (CFDT) or the National Union of Autonomous Unions (UNSA) practice more constructive unionism.

Macron hopes that the prolonged duration of the strike and union disunity can erode the protest movement before a new round of negotiations begins on January 7th.  So far, however, the government ploy has not worked given that the protesters are so determined and motivated as they were when their demonstrations began on December 5th.

​​​​​​During the end-of-year presidential address, Macron will not be able to avoid talking about the social crisis unleashed by his pension reform project. Citizens do not expect surprises.  "I don't expect anything from that speech because this president only understands force," Christelle, a teacher, said and added that "his administration has not yielded anything."