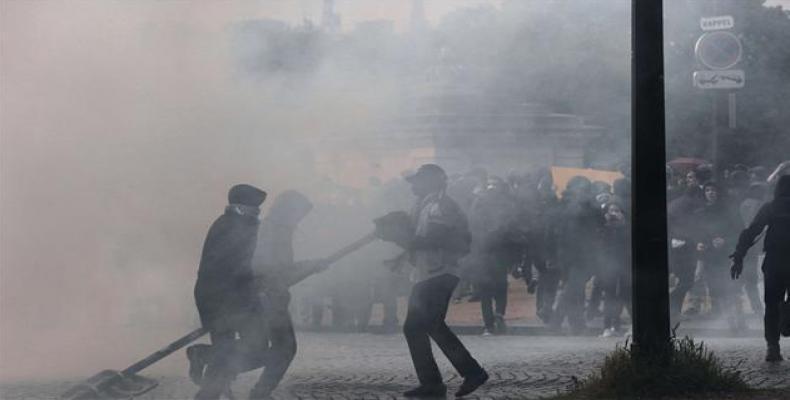 Paris, May 18 (RHC)-- French police have used tear gas on hundreds of protesters who had taken to the streets in Paris to express their resentment at a controversial law proposed by the government.

The rally organized by unions and students came after President Francois Hollande pledged in a radio interview to press ahead with his planned labor market reforms.  The protesters held up signs reading: “To disobey, is to think first and then act!” and chanted: “Media are liars, police are fascists.”

The initially peaceful protest turned violent, when some youth protesters threw projectiles, including bricks, toward police and damaged public property, prompting security police to use tear gas against them.  Union leaders lamented the violence, arguing that it spoiled the message behind the protests.

Local media reported that 12 people were arrested in the Paris rallies, nine of whom for carrying munitions and three others for throwing objects.

The French government says the proposed labor reforms focus on maximum working hours, holidays as well as breaks, and are aimed at curbing the country's unemployment rate, which Hollande is trying to lower below 10 percent.

Protesters and workers' unions, however, say the government wants to make it easier and less costly for employers to lay off workers.