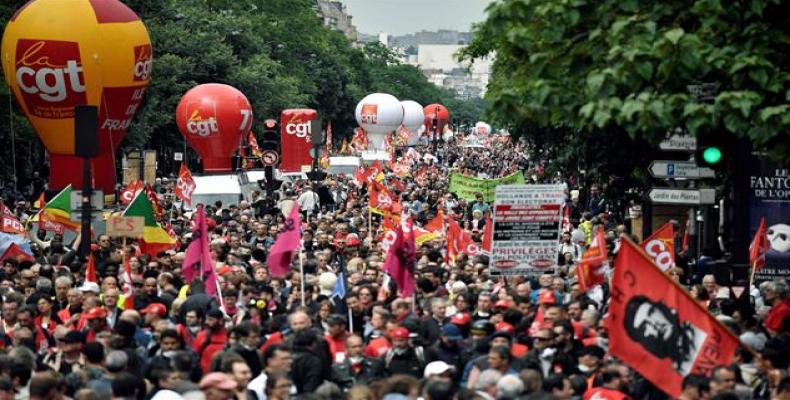 Paris, June 29 (RHC)-- Thousands of French protesters have staged a fresh rally in the capital, Paris, against the government’s proposed labor reforms.  Large crowds of protesters took to the streets to decry the highly-unpopular controversial labor reforms.

At least 2,000 police officers were deployed to provide security and prevent unwanted incidents of violence at the event.  The march was permitted to take place in a restricted area.

The entire route was heavily cordoned, with all participants having to go through searches and checkpoints if they wanted to join the massive rally.  Helmets were prohibited as well as anything that could be used as a projectile.  At least 100 protesters were detained for carrying potential projectiles or face coverings.

In addition to that, French security forces made two dozen arrests ahead of the march from the historic Place de la Bastille across the Seine to the Place d'Italie in southern Paris.

The demonstration was the eleventh in a series of protests against labor reforms since March 9.  Earlier, seven unions also submitted partial results from a public survey on the draft labor law, with 92 percent of 700,000 respondents calling for its withdrawal.