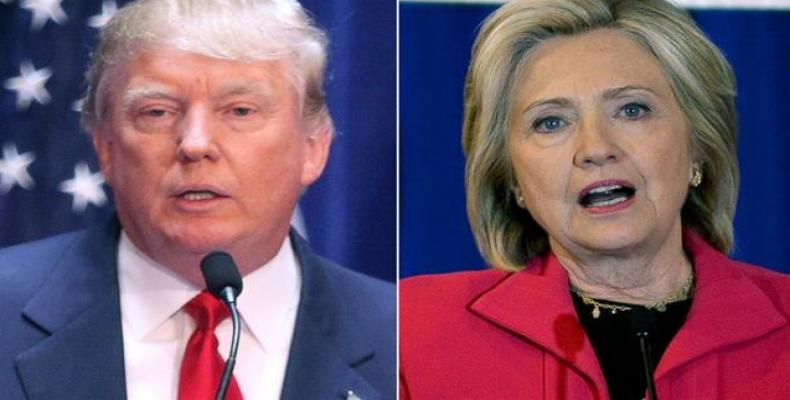 Washington, May 23 (RHC)-- A new survey in the United States shows that eighty percent of Republican voters want party leaders to step in line behind Trump in spite of any differences of opinion.

Republicans and Democrats are approaching their July nominating conventions with unease, since their likely nominees Donald Trump and Hillary Clinton are widely disliked by voters.

According to a New York Times/CBS poll, nearly two-thirds of voters say both Trump and Clinton are not honest nor trustworthy.  But the poll did say that 80 percent of Republican voters want to see their party united and with its leaders lined-up behind the presumptive nominee Trump, despite his low approval ratings in general.

Despite the skepticism against the two candidates, registered voters have said they prefer Trump rather than Clinton.  Fox News released a poll saying the billionaire has a three-point advantage against the former secretary of State, who is looking to bury rival Senator Bernie Sanders at the upcoming California primary.

Clinton holds a commanding lead in the delegate count, but the Vermont senator has vowed to fight until the party convention at the end of July.  A poll conducted by Al Jazeera early this week shows that Sanders is more likely than Clinton to defeat Republican presidential nominee Trump in the November general elections.