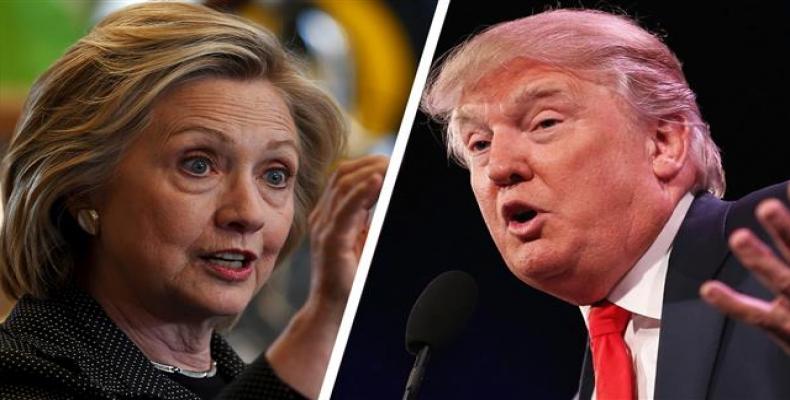 Washington, May 18 (RHC)-- Presumptive Republican presidential nominee Donald Trump has narrowed the gap to within 3 percentage points of his Democratic rival Hillary Clinton, according to a new poll.

Donald Trump has gained 2 points on Clinton in the past week, a national tracking poll from NBC News has found.  Trump has already closed to within the margin of error in a Reuters poll released Wednesday, trailing her by an average of just 1.2 percentage points.

In a general election match-up, Clinton has much more support than Trump with Blacks and Latinos, leading him with those groups by 75 to 37 percent.  Trump, however, has more support among white voters by 14 points, a number large enough to cancel out his deficit among the smaller numbers of minority ballot-casters.

Gender appears to be even more crucial than race in the polling numbers, however.  Hillary Clinton is leading Trump by 15 points among women.  Trump's 11 point edge among men isn't enough to erase the gap.

That same four-percent gap between the Democratic edge with women and the Republican advantage with men played out in the 2012 presidential election, with Barack Obama occupying the same position Hillary Clinton is in today.