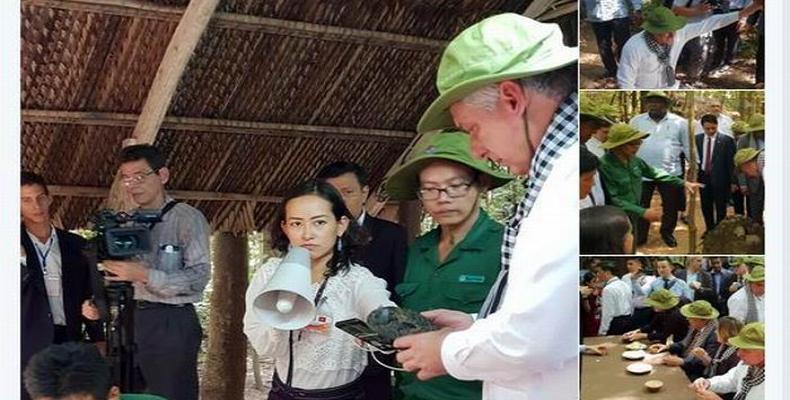 Hanoi, November 10 (RHC) – Cuban President Miguel Diaz-Canel concluded a three-day official stay in Viet-Nam this Saturday with a visit to Ho-Chi-Minh City, former Saigon, some 1500 kilometers from Hanoi, the capital.

Ho-Chi-Minh is Viet-Nam's most densely populated city and the country's main economic, industrial and financial hub.

The Cuban president's first stop in the visit to Ho-Chi-Minh City was a tour of the tunnels at Cu-Chi. Cu-Chi is a district located northwest of Ho-Chi-Minh City. Its underground tunnels stand as a testimony of the Vietnamese resistance against the U.S. invaders.

The extensive system of interconnected tunnels here runs along more than 250 kilometers and was used by the Vietnamese guerrillas as a communication and supply route during the war. The tunnels contained hospitals and food and weapon storage facilities, and provided shelter for the fighters.

“This monumental system of guerrilla tunnels is an expression of the talent, intelligence, tenacity, perseverance, audacity and courage of the heroic Vietnamese people,” the Cuban president wrote in the visitor's book. “Thanks for the opportunity, thanks for the example,” he concluded.

During his stay in Ho Chi Minh City, President Miguel Diaz-Cancel also visited the high tech park, one of three in the country, based on training and on the use of high technology for productivity. Several top Vietnamese companies investing in Cuba are headquartered in Ho-Chi-Minh City.

The next stop after Viet-Nam in President Miguel Díaz-Canel's Asia tour will be in the People's Democratic Republic of Lao.