Excellent visit of the Cuban president in Algeria 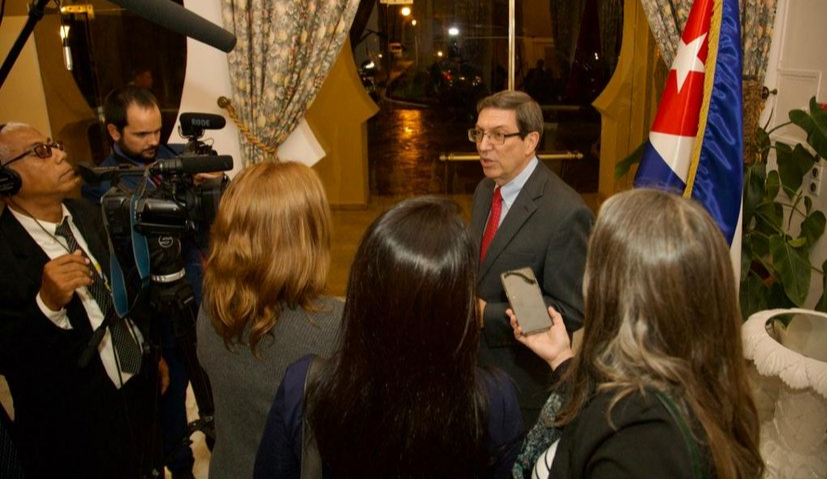 Algiers, Nov 19 (RHC) The Minister of Foreign Affairs of the Republic of Cuba, Bruno Rodriguez Parrilla, shared Friday night with journalists accompanying President Diaz-Canel on his international tour these days, ideas on the results of the visit of the Head of State to the People's Democratic Republic of Algeria.

"It has been an excellent visit. It is a milestone in the development of bilateral relations". This is how Cuban Foreign Minister Bruno Rodríguez Parrilla assessed the agenda that the First Secretary of the Central Committee of the Communist Party and President of the Republic of Cuba, Miguel Díaz-Canel Bermúdez, has been carrying out in the People's Democratic Republic of Algeria since November 16 and until today.

When asked about his assessment of the results of the official visit, the Cuban Foreign Minister reflected that "it has been an intense and fruitful day. Algeria has an enormous feeling of friendship and solidarity with Cuba, there is an understanding of the heroic struggle of our people amid difficulties, and a feeling of deep gratitude for Cuban cooperation in the field of health, which began in 1963, and lasts until today".

Bruno Rodriguez said that the talks with the President of the People's Democratic Republic of Algeria "were very fruitful, cordial, and profound". According to the Foreign Minister, His Excellency Abdelmadjid Tebboune "expressed his solidarity and support in the struggle (of the island) against the blockade, and also expressed deep gratitude for Cuba's uninterrupted cooperation in Algerian territory".

The Cuban Foreign Minister stressed the value of the Algerian president expressing "solidarity and understanding in the face of the intensification of the blockade, which Algeria condemns in all international forums"; and highlighted the initiative of the North African country "to partially condone and reschedule the debt, while working to increase Algerian investments" with Cuba.

Bruno Rodríguez Parrilla highlighted the announcement made by the Maghreb country's dignitary of the forthcoming visit to Cuba by a large representation of Algerian businessmen; the donation of a photovoltaic power plant; as well as the possibility of working together in the energy field.

Furthermore, on the fruits of the meeting between the two leaders, the Cuban Foreign Minister stressed that interests were identified in areas including the pharmaceutical and biotechnology industry, and the health and energy sectors.  "It is confirmed that there is a historic friendship, founded by the leaders of the Cuban Revolution and the Algerian Revolution, a huge coincidence on the issues of the international situation, and the willingness to continue working," he said.

Finally, the Minister affirmed that the visit to this first country of the tour of the President of the Republic of Cuba, "has been very focused in one sense: in the development of mutually beneficial links, and also in two countries that share many foreign policy objectives, and that will work together, fundamentally in the Group of 77 -which will have Cuban presidency next year in the Movement of Non-Aligned Countries, and in all multilateral spheres". (Source: Presidency website)