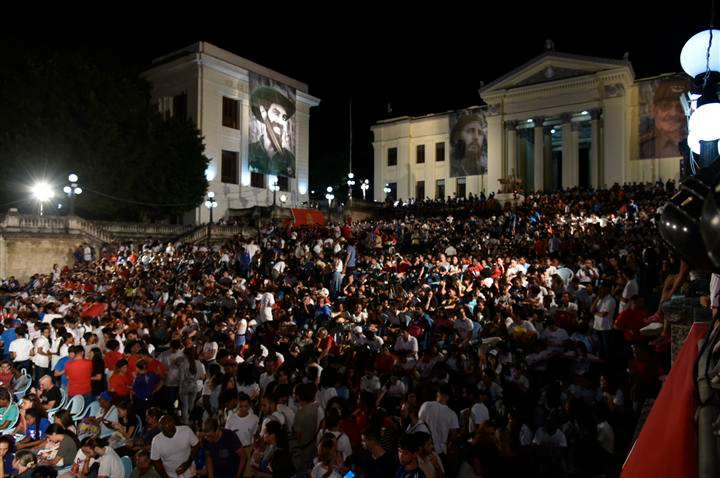 Havana, Nov 26 (RHC) Young Cuban university students reaffirmed Friday from the steps of the University of Havana, the validity of the work and thoughts of the historic leader of the Revolution, Fidel Castro.

The new generations paid tribute to the Commander in Chief, as Cubans call him, on the occasion of the sixth anniversary of his death with a political and cultural evening called Fidel in me.

The event was attended by members of the Political Bureau of the Central Committee of the Communist Party (PCC), Esteban Lazo, president of the National Assembly of People's Power (parliament); and Roberto Morales, secretary of Organization and Cadres Policy of the political group.

Also in attendance were other members of the Political Bureau of the PCC; the Council of State; the vice prime minister, Commander of the Revolution Ramiro Valdes; the commander of the Rebel Army Jose Ramon Machado Ventura, ministers and the main authorities of the capital.

Janny Gómez, a member of the national secretariat of the Federation of High School Students (FEEM), ratified the commitment of her generation to the teachings of Fidel, whom she considered a reference for revolutionaries in Cuba and the world. Speaking on behalf of the young people, the leader highlighted the value of the example bequeathed by the fighter, who was always on the side of noble causes, a role model to be followed by Cubans, she said.

We will continue to denounce the U.S. economic blockade, the injustices in any part of the planet, and we will fight for the best of humanity, she added.

The FEEM representative also highlighted the participation of young people in the municipal elections this Sunday 27th, some like her for the first time, others even nominated as delegates, but all as part of a genuinely democratic exercise that distinguishes the Caribbean nation.

Songs, tenths, dances, and audiovisuals served as a tribute to the leader who aroused admiration and respect among the people and who throughout his life demonstrated an invariable trust in young people.

Fidel Castro was born on August 13, 1926, in Biran, in the eastern province of Holguin.

From a very young age he was involved in student struggles and after Fulgencio Batista's coup d'état (1952-1958) he led the revolutionary forces that opposed him and achieved his overthrow on January 1, 1959.

He led the process of social transformation initiated in Cuba from that moment on, until 2006 when he left his government activities due to illness. He passed away on December 25, 2016. (Source: Prensa Latina).