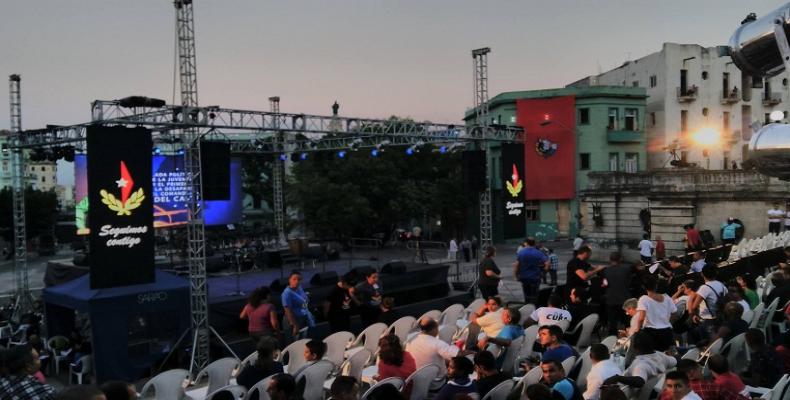 Havana, 25 November (RHC) Thousands of Cuban youths gathered this Saturday evening on the Grand stairs of Havana University to pay tribute to the historical leader of the Cuban Revolution, Fidel Castro,  on the first anniversary of his passing.

Heading the tribute was the Second Secretary of the Cuban Communist Party, Jose Ramon Machado Ventura, other members of the Party´s Central Committee, and leaders of youth and students’ organizations.

Renowned artists performed during the evening and played songs that reminisced about the late leader´s example and sacrifice for his people and for the people in need around the world.

Young artists expressed their appreciation for the historic leader through music, poetry and dances and they renewed their commitment to carry forward and keep the achievements of the Revolution.

On the stage that was erected and the bottom of the grand stairs of the university, artists recalled the years when Fidel studied in its Law School, and the numerous visits he paid to university, traditional scenario of struggles of student movements before the triumph of the Revolution on January 1st, 1959.

In one of those visits, the Cuban leader confessed that it was in Havana University where he became revolutionary.

For several days now, tributes have been organized throughout Cuba and in other countries of the world on the occasion of the first anniversary of Fidel Castro´s transition to immortality.