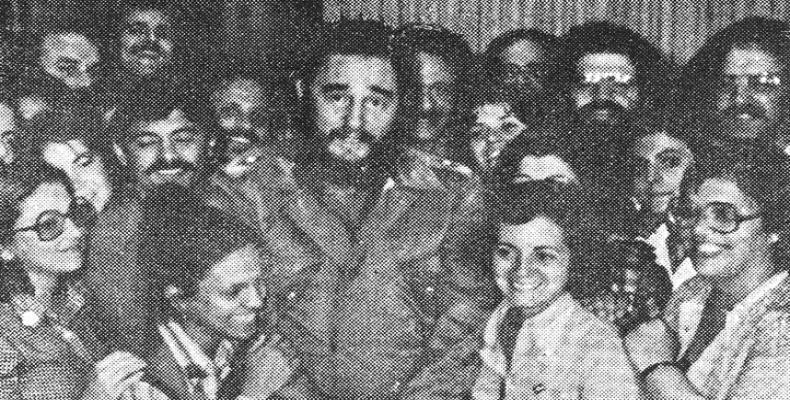 The Fourth Conference “The Nation and the Emigration,” convoked by the Cuban government for April 8 to April 10 in Havana, is a continuation of a dialogue between the Cuban government and the Cuban émigré community, initiated by Fidel Castro in 1978. There were a number of factors in the late 1970s that established a favorable political and ideological context for this initiation of dialogue.

During the 1960s and 1970s, there was a left-wing current within the Cuban-American community, formed from various sources. First, there was the revolutionary remnant in the United States of the pre-1959 anti-Batista struggle, centered in New York. Secondly, there were Cuban youths who, by virtue of their integration into U.S. society, had been influenced by the civil rights and anti-war movements in the United States, and who searched for an identification with the Cuban Revolution on the basis of this U.S. radicalized political thought. Thirdly, there were Cuban-American youths who had passed through the counterrevolutionary ideology embraced by the majority of the emigration, but turned to the Left as they acquired greater intellectual and political maturity.

Youth from these Leftist tendencies formed the Antonio Maceo Brigade, which organized a trip to Cuba near the end of 1977, culminating in a meeting with Fidel. In a September 6, 1978 interview with Cuban journalists tied to the Cuban émigré community, Fidel asserted that the visit of the Antonio Maceo Brigade had a great impact on Cuban public opinion, inasmuch as those youth, who were not in any way responsible for problems between the Cuban government and the Cuban émigré community, visited Cuba with an attitude of peace and friendship.

Meanwhile, the Carter administration had adopted a foreign policy of a trilateral alliance of the United States, Japan, and Western Europe, which would possess sufficient economic strength to control the markets and natural resources of the world, permitting “peaceful coexistence” with the Soviet Union. With respect to Latin America, such a foreign policy implied a de-escalation of the USA-Cuba conflict. Accordingly, the Carter administration lifted the prohibition of U.S. citizens to travel to Cuba, signed a new agreement with Cuba with respect to fishing, and renewed agreements concerning the seizing of vessels. In addition, two countries opened diplomatic “interests sections” in Havana and Washington, and diplomatic, academic, and cultural interchanges between the two countries increased significantly. There were points of conflict, such as contrasting and opposed interpretations of human rights, Cuban ties with the Soviet Union, and Cuban support for the governments of Ethiopia and Angola, with Cuba insisting that, as a sovereign nation, it had the right to formulate an understanding of democracy appropriate for its reality, and to establish relations with other governments. However, in spite of these conflicts, the United States and Cuba were moving toward the normalization of relations. U.S. Secretary of State Cyrus Vance declared that the United States was disposed to negotiate with Cuba, without establishing previous conditions.

Coinciding with the Carter administration’s foreign policy of “peaceful coexistence” with the Soviet Union and Cuba, there emerged in the lower income sector of the Cuban émigré community a current of thought in favor of peaceful coexistence with Cuba. Rejecting the terrorist violence of the extreme Right, it proposed a peaceful and negotiated solution to the problem of family unification. However, this current of thought had limited influence in the Cuban-American community, because it did not have a clear ideological formulation that constituted an alternative to the hostility toward the Cuban Revolution of the extreme Right, and because of its lower-class position and its fear of confronting the extreme Right and its terrorist violence. These factors limited its influence, preventing it from becoming a majority current among Cuban-Americans in the Democratic Party in favor of peaceful coexistence with Cuba, consistent with the foreign policy of the Carter administration.

But in spite of the limited political reach of the position of peaceful coexistence in the period 1976 to 1979, it nonetheless was advocated by some émigré intellectuals, persons with diverse ideological and political views, who had some weight in public opinion. Some of them were affiliated with the Instituto de Estudios Cubanos, which had been established by Professor María Cristina Herrera in 1971.

At the time, the Carter administration was proactive in attempting to establish relations with a sector of the Cuban-American bourgeoisie that had an economic interest in normal relations with Cuba and would be oriented to support a policy of peaceful coexistence with Cuba. One of them was the banker Bernardo Benes, who had organized travel groups to Cuba and had met with Fidel.

In the September 6 interview, Fidel declared that he had become aware that the community has interests in resolving certain questions, such as the remaining political prisoners in Cuba, family reunification, and the right of Cuban nationals abroad to visit their families in Cuba. He asserted that the call for dialogue is a gesture of recognition that the community exists and that it has its interests.

In the interview, Fidel declared that the Cuban government had not been able to contemplate dialogue with the Cuban émigré community when the U.S. government was supporting terrorism against Cuba. But now that the U.S. government has a policy of détente, and now that the hostility of the Cuban emigration against the Revolution has decreased, the possibility for dialogue exists. And, Fidel observed, another important factor in making possible dialogue is the fact that the Cuban Revolution is consolidated and is irreversible, a fact that is known and accepted by the majority in the émigré community.

With awareness of the importance of the issue of political prisoners to the émigré community, the Cuban government, prior to the September 6 interview, started to make a list of political prisoners, paroled prisoners, and former prisoners for release and possible authorization to relocate to the United States. In the interview, Fidel noted that there were many questions to consider in each case, such as their possibilities and desires for employment in Cuba or relocation to the United States. He observed that a final decision had not yet been made, but there was possibility for the release of many of the remaining prisoners. This was being done, he said, as a gesture that shows the seriousness of the Cuban government with respect to the resolution of the problems with the Cuban émigré community.

In the conversations that were held in November and December of 1978, 140 representatives of the Cuban émigré community were present, including thirty representatives of the Left, 34 intellectuals, and nineteen leaders of organizations that advocated peaceful co-existence with Cuba. Following the conferences, 3,600 prisoners were released, Cuban migratory policy was made more flexible, and visits to Cuba by Cuban emigrants were authorized.

As I observe the dynamics of the rapprochement between the Cuban government and the Cuban émigré community, I note that the two practical possibilities for the community are counterrevolution, on the one hand, and peaceful coexistence, on the other. A third option, that of appreciating the importance of the Cuban Revolution as an advanced and paradigmatic understanding of the meaning of democracy, educating the people of the United States to this effect, appears not to be present, except perhaps for the leftist youth, who at that time lacked the maturity of understanding and level of organization to present this possibility as a viable road, as an alternative to both reaction and moderation.

We in the upcoming weeks, we will have more commentaries on themes related to the Cuban emigration, in anticipation of the April 8-10 conference on “The Nation and Emigration.”