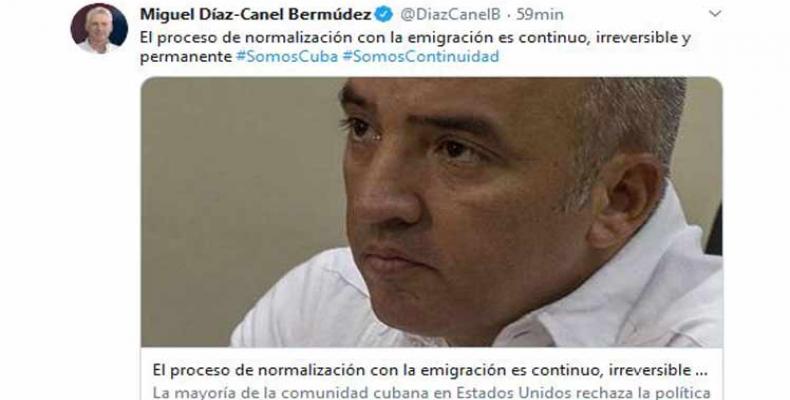 Havana, January 16 (RHC)-- Cuban President Miguel Díaz-Canel Bermúdez ratified on Thursday the commitment of the Caribbean nation to the process of normalization of ties with its nationals living abroad, described by authorities as continuous, irreversible and permanent.

In his Twitter account, the president posted a link to the website of the Juventud Rebelde newspaper where the Director-General of Consular Affairs and Cubans Living Abroad (DACCRE), Ernesto Soberón, states that the government recognizes, values and counts on the work of its emigrants in defense of the Revolution.

Soberón added that the island will continue to promote the process of strengthening ties with its emigrants, initiated by the historical leader of the Revolution, Fidel Castro, in 1978, and continued by Raúl Castro and Díaz-Canel.

He also pointed out that the holding of the Fourth Conference on Nation and Emigration in Havana next April will constitute a new and important step forward in terms of continuing to strengthen ties between Cuba and its nationals around the world.

He stated that among the topics of that meeting are the defense of the Revolution and the condemnation of the blockade maintained by the U.S. government against the Caribbean nation, the cultural and economic links, and the promotion of the rapprochement of young people and descendants of Cubans.