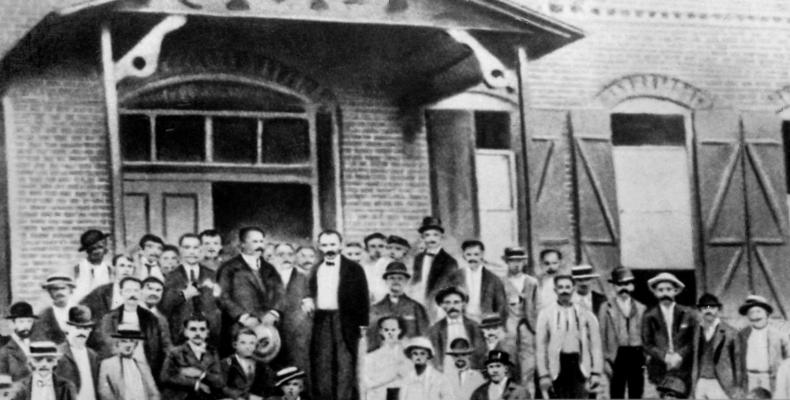 The United States has been the natural destiny of Cuban emigration since the nineteenth century, as a result of their geographical proximity and increasingly growing economic relations. In the 1820s, there were 1,000 Cuban emigrants in the United States, mostly intellectuals and political figures that were persecuted by the Spanish colonial authorities, or had gone to the United States in order to conduct their activities with greater freedom. Among them were the pioneers of the independence movement, including Father Felix Varela.

The number of Cuban emigrants in the United States increased significantly in the 1870s, reaching 12,000. For the most part they lived in identifiable Cuban settlements; some 4,500 in New York; 3,000 in New Orleans; 2,000 in Key West; and 2,500 in the rest of the country. Many of them returned to Cuba following the end of the Cuban war of independence in 1878.

A Cuban tobacco industry, escaping Spanish colonial regulations, had begun to establish itself in the 1870s. By 1890, 20,000 Cubans, mostly tobacco workers, resided in Key West and Tampa. With a high working-class percentage and racial diversity, the Cuban émigré communities had a political environment very different from that of Cuba. Their high degree of cohesion and political radicalism favored the development of a workers’ movement very advanced for its time. The question of independence was among the issues that were central to public debate, and the communities played a central role in the movement for independence led by José Martí and in the formation of the Cuban Revolutionary Party.

There was, however, a level of class, racial, and ideological diversity in the émigré communities of Key West and Tampa. Central to the success of Martí was his convincing the emigration to subordinate differences in class, skin color, and ideology to the issue of independence, and to recognize that its principal function and duty was to support the revolutionary movement on the island.

The Cuban émigré communities also included a sector of the Cuban bourgeoisie that supported the annexation of Cuba by the United States. They penetrated the independence movement; and following the death in battle of José Martí in 1895, they were able to distort the political proposals of the Cuban Revolutionary Party toward support of U.S. intervention in 1898. The most important of them was Tomás Estrada Palma, who became the Secretary of the Party following the death of Martí. He dissolved the Party on December 21, 1898, on the specious grounds that independence had been attained, and the Party was no longer necessary. The dissolution of the party of the revolution was an important factor, among others, in rendering the independence movement impotent before the maneuverings of the U.S. government, culminating in the establishment of the neocolonial state, with Estrada Palma as the first President of the neocolonial republic, in 1902.

A good part of the Cuban emigration returned to Cuba to join the struggle for independence during the war of 1895 to 1898, or they returned immediately after the defeat of Spanish colonialism, so that the Cuban community in the United States descended to 11,000. However, the continuation of social enclaves, with an economic cohesion centered in the production of tobacco, made possible the preservation of traditions and a consciousness of national identity. During the 1930s, however, the Cuban tobacco industry in Tampa and Key West entered into crisis, and the Cuban social enclaves suffered a tendency toward dispersion.

There were significant political conflicts during the neocolonial republic, including the Machado dictatorship of 1926 to 1933, the Batista dictatorship of 1934 to 1937, and the second Batista dictatorship of 1952 to 1959. These political conflicts strengthened migratory flows toward the United States. At the same time, a good part of the Cuban bourgeoisie preferred the United States as a place of residence, and it was common for them, as well as the upper middle class, to send their sons and daughters to study in in the United States as well as to travel to that nation frequently for personal or business reasons. In addition to political exiles and the national bourgeoisie, the Cuban emigration was shaped by the economic condition of the United States a great receptor of working-class immigrants, fueled by an industrial economy expanding in an exceptional manner.

It is difficult to count the accumulated effect, that is, the permanent population of Cuban origin in the United States in 1958, inasmuch as not all immigrants were permanent residents, and movement went in both directions. Estimates are, however, that residents of Cuban origin in the United States, including descendants, numbered 125,000 on the eve of the Cuban Revolution. Most were working class, and they lived in conditions similar to those of other groups of Latin American immigrants. Such conditions included the prevailing racism, anti-unionism, McCarthyism, and anti-Catholicism of the era; and they prevented Cuban immigrants from experiencing significant upward social mobility. Cuban immigrants, therefore, were not able to convert themselves into a success model, as they did later. On the contrary, life was not easy for the majority of Cuban immigrants of South Florida in the 1950s.

During the years of the struggle against the Batista dictatorship, Miami became the center of the opposition in exile. But there was a clear social and political differentiation. The Cuban bourgeoisie and the upper middle class in the United States were nearly all white, conservative, and often Protestant. They had close ties to the United States, and they for the most part supported that Authentic Party of Ramón Grau and Carlos Prío, which held political power from 1944 to 1952; rather than the more radical Orthodox Party of Eduardo Chibás or the July 26 Movement of Fidel. This explains why the most conservative sectors of the anti-Batista movement found the émigré community to be their natural environment.

On the other hand, the majority of the émigrés of the 1950s were workers. In 1955, Fidel traveled to the United States, and for seven weeks he dedicated himself to the organization of patriotic clubs of the July 26 Movement. The base of these clubs were emigrant workers, who contributed one day’s income per month if they were employed, or a dollar per month if they did not have work. Although they did not play a decisive role in the insurrectional process, they in the majority rejected the dictatorship and supported the revolution. This explains the massive repatriation that occurred immediately after the triumph of the Revolution.

We see, then, that from the 1820s to the 1950s, Cuban emigration was primarily located in the United States, reflecting growing economic interdependency. And the characteristics of the Cuban émigré community were shaped by the developing political-economic conditions of both the United States and Cuba. This would continue following the triumph of the Cuban Revolution, and as is logical, the revolutionary transformations and the response of the U.S. government effected the characteristics of the Cuban émigré community.

We will continue to devote episodes of Notes on the Revolution to themes related to the Cuban emigration, in anticipation of the Fourth Conference on “The Nation and the Emigration,” which will take place in Havana from April 8 to April 10.