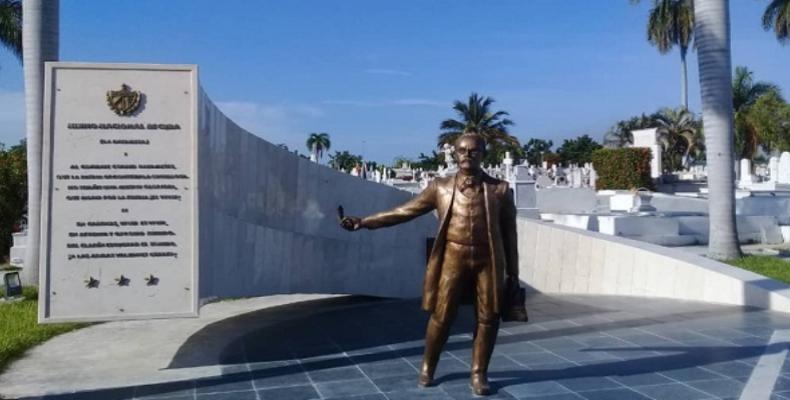 Santiago de Cuba, October 8 (RHC)-- A monument to Pedro (Perucho) Figueredo, author of the National Anthem of Cuba has been completed in the patrimonial cemetery of Santa Ifigenia, joining valuable sets that pay tribute to heroes of the island´s independence and liberation wars.

This is the first work installed in the necropolis after the transformations carried out in October 2017, when the transfer of the funeral memorials of the Father of the Fatherland, Carlos M. de Céspedes, and the Mother of the Maceo brothers, Mariana Grajales, were officially unveiled in the cemetery´s front esplanade next to the Mausoleum of José Martí and the monolith of Fidel Castro.

The newly completed sculptural enclave pays homage to Figueredo, the patrician, born in the eastern village of Bayamo on February 1818 and executed in Santiago de Cuba by the Spanish colonialists on August 17, 1870.

The monument was the work of sculptor Julio César Carmenate and architect José A. Limonta, whose design was selected in a national competition organized by the Council for the Development of Monumental and Environmental Sculpture.

The complex portrays the lyrics of the national anthem and the flag that breaks a chain of slavery.