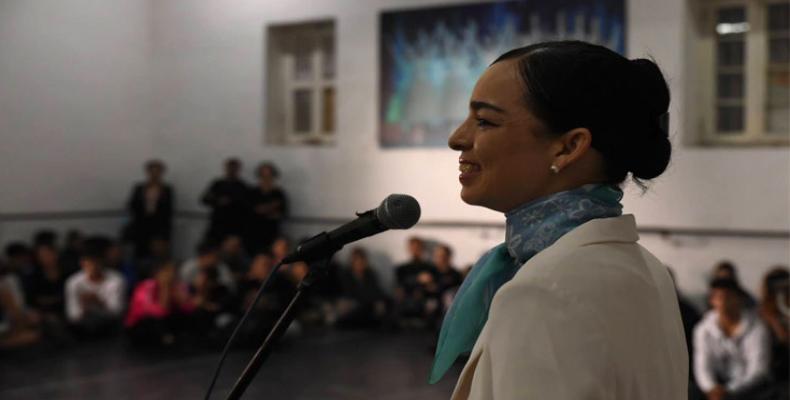 In statements to Prensa Latina news agency, Valdés said she is grateful and feels she can help dancers in their training and professional development to share the common dream of a united and strong company. According to the Ministry of Culture’s official designation, Alicia Alonso continues to be the Cuban National Ballet Company’s General Director, though Valdés will make the ensemble’s artistic decisions.

‘I have the best relationship with Alicia,’ she said, ‘marked by respect and admiration. She’s always given me the best professional advice in my career and been an example to follow,’ stressed the dancer and now deputy director. Due to her health condition, Alonso couldn’t participate in Havana’s 26th International Ballet Festival from October 28 to November 6, and at the closing gala Valdés paid homage to the 98 year-old legend, dancing a piece by Cuban choreographer Tania Vergara with a score by pianist Frank Fernández titled ParAlicia.

In her Facebook account, Valdés valued the conservation and defense of the Cuban ballet company’s historic legacy as an internationally-known dance ensemble. She added that one of her main satisfactions over past few years has been to work near the National Ballet School Fernando Alonso, thanks to the invitations of school’s director and deputy director, Ramona de Sáa andMarta Iris Fernández, respectively. She went on to say that she wants to keep strengthening the ties between the company and the school to favor a unique work line and identity of the Cuban dancer.

On October 28th, 2018, Cubans and the international dance community celebrated the 70th anniversary of the Cuban National Ballet Company, founded by Alicia, Fernando and Alberto Alonso, a trilogy of great dancer, extraordinary teacher and original choreographer that established the principles of the famous Cuban school of ballet.

Valdés, who is considered one of the top Cuban ballet dancers, has been a guest artist with the Washington Ballet of the United States; Ballet Concierto of Puerto Rico; the Joburg Ballet in South Africa; the Bolshoi and the Mariinski of Russia, and other companies. Viengsay Valdés is a member of the UNESCO International Dance Council, has been presented with the National Culture Award in 1999, the Alejo Carpentier Medal in 2003 and the Raúl Gómez García Order in 2014.

Valdés was chosen among the top 100 dancers in the world in the 2010-2011 season by the prestigious magazine Dance Europe, and participated in a large number of galas with world stars and international festivals.