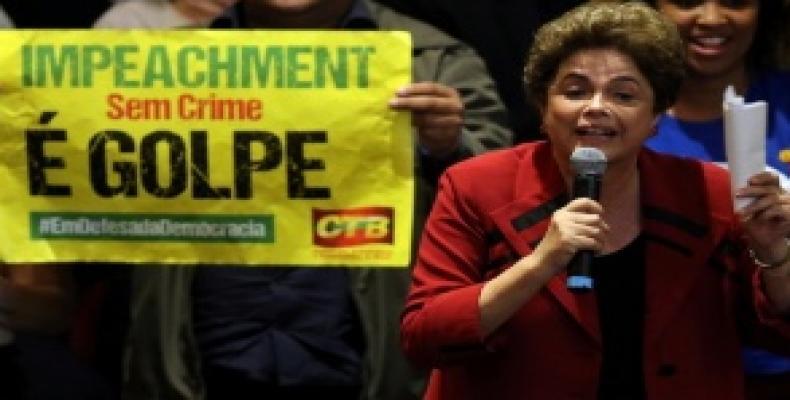 Brasilia, August 25 (RHC)-- On the eve of the country's impeachment trial, 51 of the 54 Senators needed to permanently remove suspended Brazilian President Dilma Rousseff from office had already committed to vote for impeachment when the vote is held next week, according to one of the country's leading daily newspapers, O Globo.

That means that of the remaining 30 Brazilian Senators, only three additional votes are required to permanently remove from office the twice-elected Rousseff, whose governing Workers Party, known by the Portuguese acronym, the PT, has won the last four presidential elections.

In what has been widely-condemned as a coup both domestically and internationally, a cadre of conservative Brazilian Senators forced Rousseff to step down as president while the body investigates allegations that she doctored national budgets to conceal the country's true deficit numbers.

But Dilma Rousseff has denied such allegations and her defense said it will be extremely difficult for the political opposition to uncover evidence of criminal wrongdoing.  Rousseff has filed a complaint which affirms that impeachment procedures have violated her rights; all previous complaints filed on her behalf have been rejected by Brazil's Supreme Court.

According to recent polls almost three quarters or 70 percent of Brazilians disapprove of Temer, who, along several other politicians in his cabinet of all-white-men, are under investigation for their role in the biggest corruption scandal in Brazil's history, which involves the state-owned oil company, Petrobras.