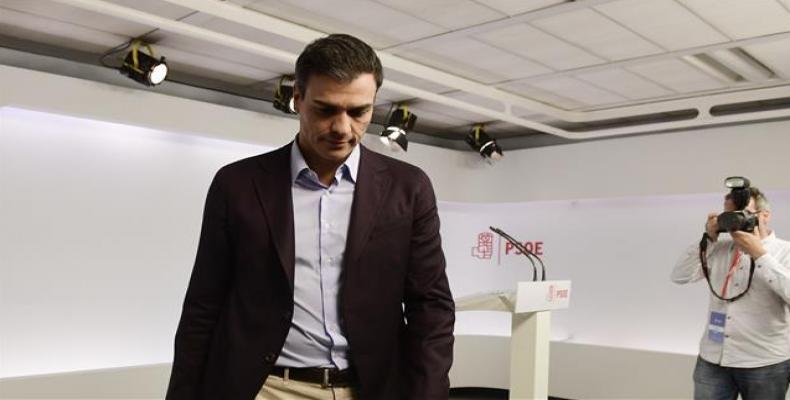 Madrid, October 3 (RHC)-- The leader of Spain's Socialist Workers' Party (PSOE) has resigned in a move that may pave the way for a new government and put an end to nine months of political deadlock in the country.

Pedro Sánchez resigned over the weekend, after losing a party vote over opening up a leadership race in October.  He told reporters: "Today, following a day of intense debates, a vote was held on whether a party conference should take place on October 23rd so that the grassroots could pick their leader... Unfortunately, I have lost this vote and I have resigned as secretary general of the party."

Sanchez had been heading a long running standoff with acting Prime Minister Mariano Rajoy's conservative People's Party (PP), which gained the most votes but failed to gain a majority in last two elections.  The PSOE's refusal to back the PP Party has left the country in a political deadlock for the nine months.

Supporters of Spanish Socialist Party (PSOE) leader Pedro Sanchez gather outside the PSOE headquarters in Madrid during the celebration of an extraordinary meeting of the PSOE Federal Committee, on October 1, 2016.  Following Sánchez's departure, the PSOE must now find a way to avoid a third election.

If the political deadlock in Spain continues until an October 31st deadline, the nation will face an unprecedented third election.  Last week, nearly half of the senior members of PSOE resigned in an attempt to oust Sanchez and end the country's political deadlock.